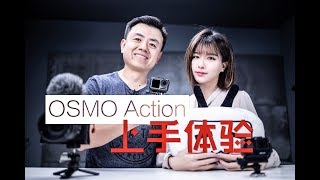 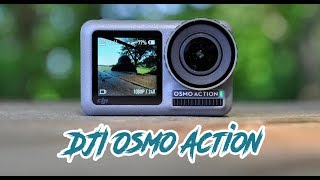 I had the chance to try DJI’s Osmo Action. I don’t practice Vlogging, so I didn’t try to see what the camera could offer for Youtube selfy video creators. I preferred to place the camera on board two racer-type devices, a Bando Killer from Tomz made by Drone-FPV-Racer, and an Oblivion from TBS. I made a few flights with the camera alone, and with two cameras on board (in addition to the FPV model) to make a small comparison with the GoPro Hero 7 Black, since the Osmo Action is its direct competitor. The characteristics are summarized here.

On my scale, the GoPro Hero 7 displays at 116.6 grams. The Osmo Action is a little heavier, at 124.7 grams. An overweight probably due to the presence of two screens. The housings of the two cameras seem similar at first sight, yet they are slightly different. This means that the supports for GoPro Hero 7 Black will accommodate Osmo Action if they are flexible enough, made of TPU for example. Otherwise, they will not be compatible.

To control the DJI camera, you can use the buttons, there are 3 of them: the on/off and recording button on the top and the Quick Switch button on the left side. It measures 5.7 cm diagonally, with enough brightness to see it well even in direct sunlight. It is tactile and allows access to most of the device’s settings.

This is the one that is placed at the front of the camera. It is square in shape, 3.5 cm diagonally. To display the 16:9 image, it does not resize the image. DJI’s method consists of cutting the edges to obtain a square image. This screen is not touch-sensitive. To activate this screen, you must type twice with 2 fingers on the main screen.

Yes, vlogs or video selfies fans will love it because you can monitor the framing in real time, and make it easier to check what you see in the image. With one downside, however: you don’t see the edges of the image cut off. For example, if you put your fingers on the side of the lens, it is likely that you will not notice it, they will not be displayed on the square screen. To return to the main screen, you must again tap with 2 fingers on the main screen.

Osmo Action is compatible with the DJI Mimo smartphone application, which was unveiled by DJI when the Osmo Pocket was released. The connection is made via Wifi. Note that the camera includes some simple commands, to be stated for the moment in English. Or in Mandarin, if you master it well. French should arrive later, a DJI spokesman told me.

The support for GoPro Hero in TPU allows you to install the Osmo Action on board the Bando Killer without any worries, and without the need to force. The support swells a little, but not in a disturbing way. On the TBS Oblivion, you must choose between support for GoPro Session too large and for GoPro Hero too narrow. It is the latter that I used, by tightening a little harder the velcro that holds the camera. Good point: the camera lens is protected by a screwed lens – it can be removed to make room for filters.

Unstabilized sequences tend to be slightly more prone to Jello-type vibrations than those filmed by the GoPro (also in unstabilized mode). I didn’t have a neutral density filter at hand to try, but the little vibration can probably be erased with the use of an ND8 or ND16 filter.

By activating stabilization, called RockSteady by DJI, the result is quite convincing, the images are streamed, without jerks… except at times. There are small lateral jolts, probably image stabilization errors when the multirotor starts on small swings. The same defect can be seen on the sequences of GoPro Hero 7 Black.

Not really. Stabilization ensures that a perfectly fixed image is maintained even when the camera is tossed around. This is what the Osmo, particularly the Osmo Pocket, or the nacelles of DJI drones offer. The “stabilization” as practiced by Osmo Action – and the latest GoPro – should rather be described as “movement smoothing”.

The colours are quite pleasant, avoiding a too pronounced dynamic, with a rather pleasant sharpness. But these criteria are very subjective: it is better to watch the video at the beginning of this post to get an idea… Remember to download this video in the link provided, as well as the raw sequences to free yourself from the destructive compression of YouTube.

The 4K/60 throughput is 100 Mbps: this is much, much more than most competing cameras. This is good news since the images are richer with less compression. But it also means that you need a very fast memory card! Note that Osmo Action encodes in h.264. No h.265 on this camera.