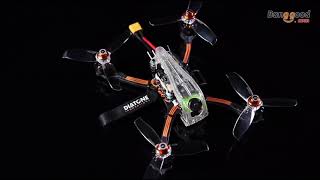 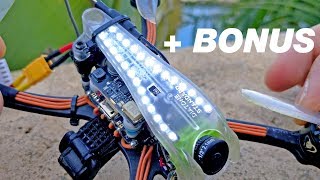 This micro racer adopts a look common to all recent Diatone devices. It comes in the form of an elongated X (stretched), unlike the GT349 that I tested here. The look is athletic: you think it’s going to fly fast… Why is Diatone associated with Eachine for this camera? The answer is not in the data sheet. It is therefore likely that this is a trade agreement of which we will know nothing. Please note that this device was given to us by the Banggood store. As usual, tell us if you think the practice has influenced our judgment.

The ER349 SX measures 14.2 cm diagonal from motor to motor, for dimensions of 13.2 x 11 x 3.5 cm excluding propellers and antennas. The carbon structure is made of one piece (unibody), 4 mm thick. The arms are slightly curved, with points at the ends of the motor supports to protect them from shocks. The motors are brushless, from 1408 to 4000KV for 3 inch 3052 three-bladed propellers. They are held on the axis by a nut. In the box, there is another set of propellers, similar in shape, but with a central adapter that allows them to be fixed on the axis of the motors with 2 screws (supplied) rather than a nut.

The motors are connected to the ESC 4 in 1 by wires without sheath but fixed properly with Rislan. This 25A ESC is at the base of a mini component tower. Just above it is the flight controller, a FuryF4 OSD based on an F4 processor and flashed with Betaflight 3.5.1. Its microUSB connector on the right side is easily accessible. Note that the welds are well done. A capacitor is placed on the flight controller. The top stage is the 5.8 GHz video transmitter, placed above a thin plastic plate, probably to isolate the components electrically and thermally.

It must be said that the transmitter in question may heat up a little. It’s a TBS Unify Pro. Or Unfty Pro according to the technical data sheet. A counterfeit of Team BlackSheep. No: the component is indeed a Unify Pro V3 from TBS, but mounted on a component to reach 2 x 2 cm and be equipped with a capacitor. This video transmitter transmits on 37 channels in 0 mW (pitmode) or 25 mW, the maximum allowed in France. Its strong point? Where it is allowed, it is capable of switching to a transmission power of 200 mW, 500 mW and even 800 mW! Interesting… The antenna is a dipole connected to the video transmitter with a u.FL plug. Good point: it is fixed along the fairing with a Rislan that keeps it in place. The FPV camera is a RunCam Micro Swift, a 600TVL with a 2.1 mm lens.

The central fairing is a simple, solid, translucent plastic blade. Just below, the manufacturer has housed 2 rows of 13 white LEDs. In the dark, the ER349 SX will not go unnoticed! To animate the device, a radio receiver must also be added. I chose a FrSky R-XSR, since it is ready to be used with the flight controller, with a compatible connector. You also need a battery. I tried Lipo 3S 450 mAh and 4S 450 mAh, with an XT30 plug. The battery is designed to be fixed under the frame, with a strap provided. Note that the manufacturer offers, in the box, a selection of M2 screws from 3 to 9 mm, a spare XT30 plug, a buzzer to mount if necessary, screws for the second set of propellers, 2 additional straps, Rislan… Ready to take off but without battery, the ER349 SX weighs 142.8 grams…

Settings with Betaflight Configurator are simple, as everything is already preconfigured, including PIDs. All that remains is to manage the switches for arming the engines and choosing the modes. You can also control the video transmitter settings directly from the remote control via the OSD with SmartAudio. Be sure to configure the transmitter to 25 mW in France, otherwise you risk a visit from an ANFR patibular controller. But if you fly in a country where it is allowed, do not hesitate to increase to 200 mW or more. The increase in power results in a beneficial reduction of in-flight parasites. The OSD display is based on a slightly large font, which is best changed so as not to occupy the entire screen.

I made my first flight with a 3S battery, while I was taking control of the aircraft. It responds well to requests and remains very stable even in Acro mode – it is locked, but not too locked. With this 3S battery, he is nervous, climbs fast… and descends very slowly due to his light weight. This will allow freestyle riders to try out daring tricks. The next battery is a 4S. No vibration concerns or poorly adjusted PIDs: the ER349 SX behaves perfectly! The difference in power is serious and the speed that can be achieved with this 3-inch device is impressive.