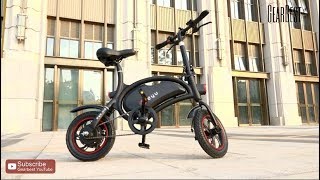 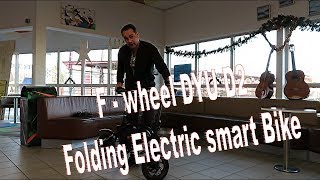 It is no secret to anyone that the means of transportation in the city is experiencing a real revolution, and with the rise of electric cars (some even able to operate autonomously) single-person transport vehicles are not left behind, resulting in models like the new F- wheel DYU D2, one of the most recent electric bicycle models of this Chinese manufacturer that has already demonstrated what it is capable of with previous models such as the F-wheel DYU, of which we have already had the opportunity to analyze beforehand.

That is why today we want to tell you the details of the new F-wheel electric model DYU D2, which has many improvements over previous models, among which its 5200 mAh battery , as well as the ability to reach a maximum speed 30 km per hour in electric mode thanks to its 250W motor.

With a compact and elegant design very similar to the one that has characterized the brand in other models, the F – wheel DYU D2 bike aims to captivate users for its beauty in two possible colors, black and white. This bicycle has dimensions of 102 x 50.5 x 94 cm deployed, but can be reduced up to 102 x 20 x 72 cm to get into any space adapted for storage or to be easily transported in the back seat or trunk of the car. In the same way it is very light thanks to the fact that it only weighs 14 Kg, a very small weight taking into account that it is made of an aluminum alloy capable of carrying a load weight up to 120 Kg.

A detail to emphasize is that unlike other folding electric bicycles, the F – wheel DYU D2 does not bend from the central part, but it is the handlebar that can be folded towards one of the sides, so it will remain very thin even when the user wants to save it. It also has 12-inch inflatable tires, and both 12-inch wheels have disc brakes. Another interesting detail is that although the bicycle has a fairly affordable price, it has both tires of very good quality, so they can withstand prolonged use.

On the other hand, the bike has two models that are differentiated by the presence or not of the pedals, although it is best to always buy the model that includes pedals to avoid problems when the battery runs out. The rest of the external details of the bicycle is not very different from others of the market, with the presence of the engine in the rear wheel, front and rear lights that are lit during braking and an internal battery that is located in the center of the vehicle. The handlebar has the presence of the buttons for the ignition of the engine, the lights, and also a screen capable of displaying information about the speed of displacement, in addition, the handlebar is adjustable.

For its part, the F-wheel DYU D2 bicycle has a remarkable power thanks to its 250W engine that allows to reach speeds of between 15 and 30 Km/h depending on the load weight and the inclination of the terrain. For maximum comfort, it has three driving modes, which are the manual, the electric mode and the moped mode, or assisted. The first is useful for when the battery is exhausted, the second is 100% controlled by the electric motor, and the third is to allow the bicycle to be pedaled but at the same time have an extra power provided by the motor.

Regarding the level of inclination that supports the DYU D2, in electric mode allows to climb a slope of up to 25 degrees of inclination , which is an advantage considering that most electric bicycles of Chinese brands only support a 15 degree inclination.

Perhaps the most negative point of the electric bike F – wheel DYU D2 is its battery, although it can reach a high speed, with only 5200 mAh the range is limited to 20 km using only the electric mode, and about 40 km in the moped mode. Which means a use of about an hour before the battery runs out completely. After downloading, the time to reload it is about 3 hours.

For added security, the F – wheel DYU D2 has a smart mobile application that can be used to lock and unlock the bike with a password. It also has an anti-theft protection function that lets you know through a notification that the bicycle has been moved.