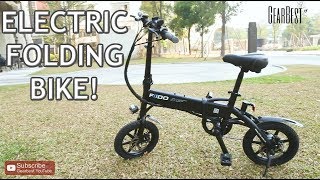 It is becoming more common to see electric bicycles on the street, the Chinese brand Xiaomi brought to the market the Xiaomi Qicycle, which has been one of the most sold internationally. The best alternative to this Xiaomi is the new FIIDO D1.

FIIDO D1 is an electric bicycle hybrid operation, can move freely around the city without making any physical effort in their mode 100% electric, but also give you a classic use by pedals in its mode helps pedaling. Both your seat and the handlebar can change their height (75 to 105 cm and 95 to 110 cm respectively), to suit any person.

When storing the FIIDO D1 it is very easy since it can be folded and put in parallel with the other half, and in this way, keep it in any wardrobe without taking up very little space. It has a general dimensions ranging from 130 x 58 x 95 cm to 75 x 65 cm.

In the handlebar of the electric bicycle we can find a series of buttons that clearly exceed the usual on a bicycle. As for the braking system is the same as the rest, while its acceleration system is similar to that of a motorcycle.

The model has a power button in its right area, three buttons to switch between its operating modes, a fixed accessory with USB port to put our phone and a small panel that reveals the battery status.

FIIDO D1 works from a 250W motor, which is the same as a sufficient power to reach maximum speeds of up to 30 km/h and to support slopes on slopes of up to 30º. The bicycle is made up of 14-inch tires. In the rear wheel we find the brake disc that guarantees durability and efficiency when braking.