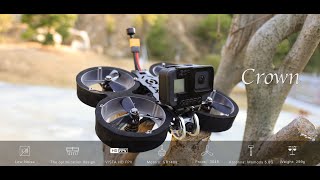 The manufacturer GEPRC already offered several 3-inch Cinewhoop, such as CineGO and CineRUN. The Crown is a new model with quite similar characteristics, also equipped with 3 inch propellers. What sets it apart? According to the manufacturer, a particular effort was made on the sound volume in flight. If this is true, it would be a good point, since the Cinewhoop are indeed very noisy. GEPRC does not indicate how it proceeded to achieve this result?

The Crown measures 15.6 cm diagonal from engine to engine, with a central carbon structure that holds the engines and electronics. The motors are brushless 1408 at 3500KV for the 4S version, and at 2500KV for the 6S version, for three-blade bullnose 3045 propellers. The heart of the system is a Span F722 HD flight controller based on an F7 processor, flashed with Betaflight. Its USB-C connector is not easily accessible, as on most Cinewhoop, but GEPRC provides an extension elbow to remedy the problem. The ESC is a 4 in 1 45A Dshot600 BLheli_S, with an XT60 power connector. HGLRC recommends Lipo batteries from 1300 to 1550 mAh in the 4S version, and 1050 to 1100 mAh in the 6S version.

The Crown is proposed in analog version with a Caddx FPV Ratel V2 camera and an analog 5.8 GHz video transmitter capable of transmitting in 25 mW (the maximum allowed in France), but also up to 600 mW, with a polarized antenna. This version weighs 281 grams (without battery). It is also available in a digital version with a Nebula Pro camera and a Vista box from Caddx, compatible with FPV headphones and DJI radio control. This version weighs 299 grams (without battery).