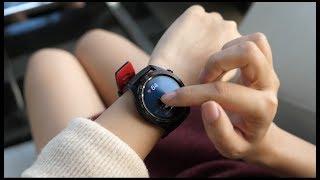 The presentation of Honor was held in China a few minutes ago. The main protagonist of this event is the Honor Magic 2, a terminal with an all-screen design and a sliding mechanism similar to that of the Xiaomi Mi MIX 3. Next to this, a new watch from the Huawei-owned firm has arrived in the form of surprise. We refer to the Honor Watch Magic, a smartwatch with features and design very similar to the Huawei Watch GT that aims to be one of the smart watches of the year, especially for its price, which does not exceed $170 at change.

It seems that mobile phone manufacturers are still betting on the niche of smartwatches. A little less than a month ago, in the presentation of the Huawei Mate 20 and Mate 20 Pro, Huawei presented two new smart watches. We talk about the Huawei Watch GT and Watch Sport, two watches aimed at different audiences. Now it’s the turn of its subsidiary, Honor, which has presented a new watch model barely an hour ago.

The characteristics of the Honor Watch Magic, as we have just mentioned, are very similar to those of the recently introduced Huawei Watch GT. In summary, we are on the following specifications:

The Honor Watch Magic received protection from water (up to 5 atm), a round 1.2-inch AMOLED touch screen, barometer, compass, NFC module, GPS / Beidou / GLONASS receiver, heart rate sensor, TruSleep 2.0 sleep monitoring function, pedometer, pairing with a smartphone, as well as a 178 mAh battery, providing up to 7 days of autonomous operation of the device.

In terms of design and colors available, Honor announces that we can find the watch in two colors in a single measure: Moonlight Silver and Lava Black.

When can we buy the Honor Watch Magic and where? At the moment, its availability is limited to the Chinese market only. However, taking into account that the brand is used to launching its products in the European continent, it is likely that it will arrive in Spain during the next few weeks at the official presentation of the Honor Magic 2 on the peninsula. In any case, we will keep abreast.

Regarding prices, we find two different depending on the chosen version: