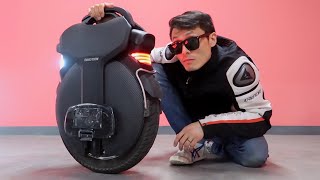 Announced at the beginning of April, the Inmotion V11 electric wheel will only go into final production in the next few weeks. The manufacturer is taking advantage of this time to develop its first suspended wheel, drawing inspiration from the feedback received from both Internet users and the first beta testers.

The first modification was announced just two weeks after the launch press conference. While the initial announcement mentioned a 1420 Wh battery, Inmotion indicated at the end of April that its V11 would finally embark the equivalent of 1500 Wh, and specified that the lithium-ion cells would finally be purchased from LG, a guarantee of quality compared to no-name components from the Chinese market.

At the beginning of June, the manufacturer announced another welcome change, this time relating to the admissible intensity during recharging. The initial specifications included two charging ports capable of accepting 1.5A, or a maximum of 3A at input. Ultimately, the V11 will be equipped with two 2.5A ports, which should reduce recharging time. 5A ports would probably have been even more appreciated, but the improvement is still welcome.

More recently, Inmotion asked Internet users to give their opinion on the desired operation of the V11’s power supply when the wheel reaches the end of its charge. It thus proposes to choose between two different scenarios and says it wants to feed on the comments of Internet users to adjust the final parameters of the wheel. Option 2 seems to be the preferred option for the moment.

It remains to be seen whether this opening will remain the order of the day once the V11 is actually launched on the market? The new Inmotion wheel, equipped for the first time with air suspension, is available for pre-order at 2290 euros from specialist dealers, with deliveries scheduled around the start of September. It will face the KS18 of KingSong which inaugurates a damping system with a different design.