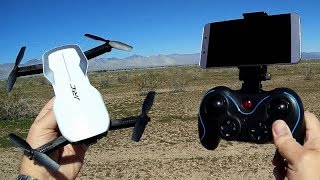 Greetings, quadcopter enthusiasts. In this article we will talk about an interesting drone JJRC H71. The manufacturer is positioning it as an aircraft designed to create selfiable photos. This is not the first drone designed to be photographed from the outside.

ZEROTECH DOBBY is the most famous drone to date, but it is much more expensive. Model H71 is a clone, but a clone of quality, with some interesting features. By the way, his brother JJRC H47 elfie appeared not so long ago, but we will talk about him another time.

Chinese developers copy ideas from each other without remorse, and JJRC is no exception. The drone elfie H71 is almost a complete copy of DOBBY, but with more modest technical and flight characteristics.

Selfie quadcopter must be small and transportable. It is this idea that was the basis of H71. The copper received a folding design, and its size in the folded state is quite comparable with modern smartphones. Except that it is 2-3 times thicker. In principle, the quadric fits in the pocket of the jacket and it will certainly find room in a small bag or backpack.

In the case of small drones, the remote control is often the most massive part of the set. However, if there is a task to create a drone for selfi, a large remote control is not needed, because lost compactness and convenience of carrying. JJRC has solved this problem cardinally and completely abandoned the remote control. It is not included in the package, and as a replacement for the pilot is proposed to use a smartphone.

When folded, the drone resembles the PSP Vita mobile console or the futuristic car of the future. The rays fold into niches on the sides of the body. There’s no need to remove the screws, they’re hiding too. On top is the switch-on button and on the bottom is the battery compartment. In front of the camera there is a tilting camera and blue signaling LEDs. There are red diodes at the back. Despite the folding design, the housing is strong enough. He does not need a hard case, you can do without a complete cloth. The black body color fits perfectly with white screws and LEDs.

You will need a smartphone or tablet to control it. You need to install a JJRC application on your mobile device, which will give you access to all the functions. Communication with the drone is via a Wi-Fi connection.

You can display the video from the Copter’s camera using FPV mode. However, it is not recommended to do this because the video transmission is delayed and not in very good quality. In the application it is possible to enable control with the help of tilts of your smartphone, but it is not recommended to do it indoors. Careless tilt may cause a collision with a wall or even a fall. It is better to use virtual sticks.

In general, the control mode of JJRC H71 with the help of a smartphone is quite convenient, although sometimes there is a lack of tactile sensations, which could provide the remote control. On the other hand, the idea of maximum compactness was put at the heart of the idea.

It would seem that a quadcopter designed for selfies should have a quality camera. Alas, we are dealing with an inexpensive toy, which has a simple camera at 0.3 MP. You can manually change the angle of tilt of the camera vertically from -15 to +15 degrees, but the quality of video and photos from this will not improve.

Video is shot at a resolution of 640×480 in H264 format. There is no optical or digital stabilization. There is not even a memory card slot. Photos and videos are stored in the smartphone memory.

But the battery did. Using the battery 3.7V 500 mAh 20C allows you to get up to 9 minutes of flight. However, charging via USB cable is slow and takes up to 2 hours. A spare battery is not superfluous.