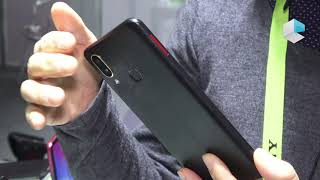 The smartphone should be a kind of flagship, good for one older model Leagoo S10, too, by the way, on the same stand exhibited. Leagoo S10 is the owner of AMOLED fullHD+ screen with built-in imprint scanner, powerful MediaTek Helio P60 chipset, 6 GB of RAM, impressive camera resolution and serious battery. Logic suggests that the Leagoo S11 should be expected to do just as well.

Leagoo S11 is a curious model at least because of the fact that the smartphone is equipped with a screen with a drop-shaped neckline, but this is not a top model at all. This is a typical middle class and obvious lowering of the bar in comparison with Leagoo S10.

The Leagoo S11 features a 6.26″ HD+ screen. The company managed to write in one line IPS, AMOLED & Incell, understand, tell as you wish. Do you believe in AMOLED? I’m not very good either. Plus, despite the press release, which states that Leagoo S11, like Leagoo S10, has a built-in fingerprint scanner, there is a traditional scanner on the back panel of the model. And the set of features on the stand about the podekranny scanner is silent.

The next step is in the same vein. The chipset for the smartphone is chosen from modest – not basic, of course, but not advanced – Mediatek Helio P22, this CPU is popular in 2019, as far as I know, the world’s first sports phone CUBOT Quest also uses this processor. RAM capacity has been reduced from 6 GB to 4 GB, and the capacity of the built-in drive – from 128 GB to 64 GB.

The main camera combines a 16 MP sensor with an additional 5.0MP camera. Front – 13 MP, they say that the production of Sony. Promise the built in artificial intelligence. Battery capacity is smaller than that of Leagoo S10 – 3300 mAh (that 4050 mAh). If they didn’t lie, Leagoo S11 supports also NFC.