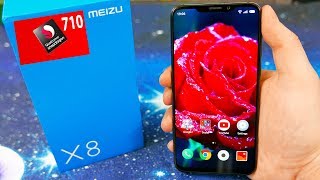 The Meizu X8 smartphone in the hierarchy of branded phones should be located right behind the Meizu 16X, which differs from the Meizu 16th only by the Snapdragon 710 hardware platform. In the Meizu X8 we see the same processor (S710), but the other features are greatly simplified. The rear camera, the IPS display, and the fingerprint scanner are all in the back, not in the screen. The screen itself became a little bigger, and a neckline for the front camera appeared on it – for the first time in the history of the brand.

The Meizu X8 smartphone is assembled in a case with a metal rim and a glass back cover. There is a fingerprint scanner on the back. This phone differs from the Meizu 16X, which, as in the latest flagship brand, the scanner is integrated into the screen.

The Meizu X8’s Dual Rear Camera module is centered on the center of the camera and above it is a flash. There is a 3.5mm audio jack. There is no NFC, nor is there a memory expansion slot. The front camera is housed in a cutout at the top of the display. A solution in the spirit of time, but this is the first time we’ve seen it in a Meizu smartphone.

The main camera is equipped with a Sony IMX362 sensor with a pixel size of 1.4 μm and a resolution of 12 megapixels. As an alternative, the Samsung 2L7 sensor with the same resolution is used. Apparently, the equipment will differ depending on the market. Which Meizu X8 sensor will appear in our latitudes is not yet clear. The aperture of the main lens is F/1.9.

An additional module with a resolution of 5 megapixels is used to read the depth of the frame and defocus the background (bokeh effect) in portrait mode. The front camera is equipped with a sensor with a resolution of 20 MP. The luminous intensity is 2.0. Supported phone unlocking function to scan the owner’s face.

Screen. To emphasize the different status of the Meizu X8 and Meizu 16X, the developers have put in the X8 is not an Amoled, and IPS LCD screen. FullHD+ resolution, diagonal – 6.2 inches. The aspect ratio is 18.5:9. An important feature of the Meizu X8 display is a cutout for the front camera.

The frames around the screen are very thin, which distinguishes the Meizu X8 from today’s Samsung Galaxy A7 (2018). (But the Galaxy A7 has a triple camera, the first in the history of the Korean brand.) The width of the side frames around the X8 screen is only 1.7 mm. The upper and lower frames are symmetrical, with a height of 4.8 mm.

The Meizu 16X, Meizu 16 and Meizu 16 Plus smartphones have a fingerprint scanner integrated into the screen, but the price starts at 300 bucks. The Meizu X8 is much cheaper – for the basic equipment is charged 230 dollars, so for a high-tech solution in the form of a screen scanner budget was not enough. The fingerprint sensor is placed on a habitual place – on the back cover center.

The bigger the screen, the higher the battery consumption, so the developers had to put a slightly more powerful battery in the Meizu X8. Its capacity is 3210 mAh. Supported by the branded fast charging technology mCharge. It is connected via Type-C.