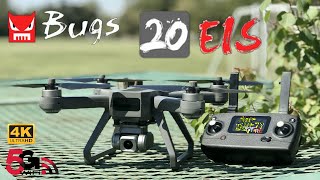 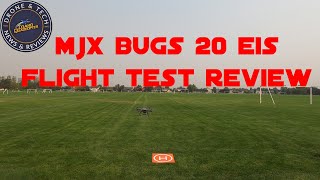 The MJX B12 EIS is a 4K and GPS quad-copter camera and costs less than $200. Finally, a camera with this resolution records video at 30 frames per second instead of 25, as the closest competitors do.

This RC Drone flies on 2204 1500KV engines and 6 Amp speed regulators, which will allow it to accelerate up to 40 kilometers per hour and stay in the air for up to 22 minutes. The maximum altitude at which the drone can climb is 120 meters. This is a program limit, which is made in order to ensure the safety of control.

These modes include the security mode, when the drone itself will return to the take-off point and will land if you have lost contact with the drone, or low battery power. This eliminates the loss of the ATV and your money. But do not hope for this feature, if you fly somewhere in the city for large houses, the ATV will not understand that on its route is a tall building and will crash into it, take into account this point.

For additional stabilization, the MJX B12 EIS has 4 sensors, it is GPS, optical flow sensor, barometer and accelerometer. With GPS, the drone is aligned, the optical flow sensor optically determines the height above ground, the barometer determines the height by pressure, and the accelerometer determines the position in space. All these data are combined to make the quadrocopter as stable in the air as possible. Unfortunately, the ATV camera is not mechanically suspended, but there is electronic image stabilization (EIS). The camera runs on a CMOS sensor (1/3 inch) and transmits video over WiFi 5G. It has a 50x digital zoom, and you can also change the angle of the camera from the remote control.

Control is performed with the remote control, which operates on a frequency of 2.4GHz, but receiving video over WiFi 5G and if your phone does not support 5G WiFi, it is better to choose another quad or buy a more modern phone. The remote control is stylized as a DJI Mavic, it has a similar screen with telemetry, two stick and a few buttons to activate the functions and control the camera. The antennas are placed on top of it. The phone is placed in the mount at the top of the remote control.

Quadrocopter is suitable for all but children. It can be controlled by any adult, because it does not require special skills, you only need responsibility for your actions, after all, it is a serious drone. A drone will be a great gift or just a choice for someone who wants an ATV, but does not want to give a large amount of money. A distinctive feature of the MJX B12 EIS will be recording video at 30 frames, and 1080 in general at 60, so the video will be high quality and most importantly – smooth, in this will also help digital electronic stabilization. It is a pity that there is no at least 2-axis mechanical stabilizer-camera suspension, but then the price will be higher and the drone will move to another, more expensive category. The drone is definitely recommended for purchase in its price category.