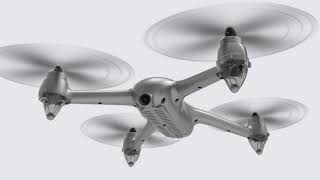 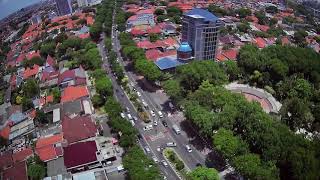 MJX B2SE is a well-designed update of the well-known quadrocopter MJX Bugs 3 Pro and is considered one of the most inexpensive models with brushless electric motors and a GPS system. It would be much easier if the manufacturer called the new Bugs 4, but MJX has a fancy strategy for naming its own products. MJX B2SE is available in two versions – with a 1080p recorder (MJX Bugs 2 B2C) and a 1080p 5G Wi-Fi transmitting video camera (MJX Bugs 2 B2W).

The radio-controlled quadcopter MJX B2SE is sold fully assembled. The diagonal between its motors is relatively small – only 310 mm. The manufacturer decided to abandon the use of nylon fiber and made the MJX B2SE case of white (B2C modification) and black or red (B2W modification) glossy ABS plastic. Side lights are placed in translucent landing legs and are very weakly visible during the day. A significant drawback is the lack of a power button on the drone.

Before the first launch of MJX B2SE, you need to calibrate its compass. The calibration procedure is mandatory, takes 15-20 seconds and is detailed in the instructions for use. After calibration is complete, the front lights will be red and the rear lights will be yellow or green. The color depends on whether the satellite is connected or not.

Both versions of the MJX B2SE are well balanced, have fairly broad flight functionality, and receive good customer feedback. If we talk about the limiting characteristics, the drone is able to climb to a height of 500 m (above sea level) and maintain controllability at a distance of up to 1 km (in open areas). A full battery lasts for 15-17 minutes of continuous flight.

The B2W modification supports flying in FPV mode, using a 5 GHz Wi-Fi connection, the range of which reaches 500 m. It is clear that this type of connection cannot guarantee the transmission of live video without delay, but their level can be considered acceptable. Note that you can use the FPV function only after loading the BUGS GO mobile application.

Quadcopter able to independently take off and sit down, keep the height and position. The relatively large weight and powerful brushless engines allow the aircraft to successfully resist a sufficiently strong wind.

Using GPS navigation has led to the emergence of three types of return home (Return-to-Home or RTH): Smart, Fallsafe and Low Voltage RTH.

The developers have provided their model with a wide range of flight functions and modes, which include:

MJX B2SE borrowed the brushless MT1806 1800 KV electric motors from the previous model. Cases for these engines are plastic, which emphasizes their budget character. Effective protection against sticking and overheating simply stops the rotation of the screws when the machine falls into thick grass or in a bush.

The new two-pot LiPo battery of the original form with dimensions 130 x 38 x 20 mm (without protruding part) and weighing 118 g is put on the novelty. The rated output voltage of the battery is 7.4 V, the maximum capacity is 1800 mAh, and the current output is 25C. The battery capacity is designed for 15-17 minutes of flight, and charging the battery with the stock memory takes 3-4 hours. This is a lot, so we advise you to purchase a spare battery  and / or more efficient memory.

The on-board equipment monitors the charge of the battery and reports its status through telemetry and flickering tail lights. The extreme measure is to start the Low Voltage RTH mode.

An overview of MJX B2SE will not be complete without a description of the video equipment, which is the main difference between the B2C and B2W modifications. Both versions are put course cameras with a CMOS sensor at 1 / 3.06 inches. The copters are shooting at 1080p / 30fps, but the B2W video equipment allows live broadcast of the picture to a mobile device in 720p format, while the B2C video camera can only record Full HD images on a removable memory card. The standard microSD card has a capacity of 8 GB and can store up to 47 minutes of video in MP4 format or 45 thousand photos in JPEG format.

The standard control panel has 4 channels operating in the 2.4 GHz band. The red end button removes the lock of the motors, next to it is the automatic landing button. On the opposite side there are organs of enabling / disabling RTH and control of shooting. Under the stick there are keys for turning on the GPS mode and starting the IOC function. It’s nice that the manufacturer thought about the convenience of users – near the main controls are clear symbolic symbols.

A small monochrome screen reproduces the altitude and range of the flight, the number of satellites detected, the state of the control signal and the service information on the charge of both batteries and the selected modes.

With FPV flights, a smartphone with the Bugs Go application is used, which is extremely simple. The picture is not cluttered with telemetry and virtual controls. At the top of the screen there are only a few icons that reflect the modes of operation and the level of Wi-Fi signal.