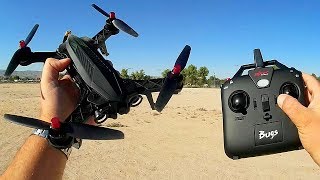 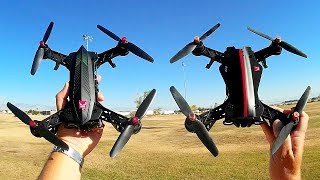 Seldom do we find products as complete as the one we have next. It will not look like it, but the MJX BUGS 6 is definitely more than a drone. And it is that if we have the complete kit (since it comes in several versions depending on the content), we can enjoy an audiovisual experience like never before.

Among the best we can get, is the professional 6-lens camera, the flight distance of up to 300 meters from the control and the 1300mAh lithium battery. But enough to talk about remnants, it is better to read everything that offers us in the analysis below.

As we mentioned before, the MJX BUGS 6 comes in different presentations, but for this analysis we will use the one that includes the monitor and the camera. Inside the box we can find almost everything necessary to start using the drone (except for the 4 AA batteries required by the controller) after a quick installation of the battery and the monitor to the control.

Its design is not quite standard. We refer to that it has the classic disposition of 4 helices located in the diagonals to be able to fly. The carcass is built entirely in plastic, and although many people may believe that this is a negative point, the truth is that it is a success, considering that drastically reduces the weight of the drone and that in case of an accident, these parts They can be replaced easily.

We found 2 pairs of Led lights located respectively on the front (white) and rear (red) of the drone. These serve to guide us when maneuvering. Under the brushless motors we find some legs that help us to prevent the drone from landing directly on the bottom, protecting the propellers.

There is not much more to say about the design, except that the company did its best to try to make the MJX BUGS 6 look like an elitist drone despite its price.

To boost this drone , the propellers have 4 1806 1600KV brushless motors. They offer enough thrust to consider the drone racing. The camera can capture images at 720p and works at 5.8G. This also allows the FPV function, which means that the pilot can operate the drone using the camera as seen in first person to guide.

In short, it is not as sophisticated as other market drones . In fact, it does not have a stabilizer or return to the base (or in this case, to the point of departure, since it does not have a base) when the battery is running low, but considering the alarm system it has, the latter is not so necessary Anyway, the battery gives about an additional 1 minute after the alarms start to sound.

The quality of the camera is quite decent, although perhaps the colors are a bit warm for some taste. You can record with a resolution of 720p, but for the price you have, you can not demand much.

As we mentioned before, the drone can move away from the control until at a distance of 300 meters. It is not much of the distance that a drone can reach, but it is good to say that thanks to the LED lights included, it is easy to determine its direction even at maximum distances. A curious function found in the control is the possibility of acrobatics, so when you press a button the drone will rotate on its own axis.

The 1300mAh battery gives us up to 12 minutes of flight with recording. Before taking off, you have to insert the battery into a compartment designed for it under the drone, and connect it to it with a plug.

If you are new to the world of drones and do not want to risk buying a very expensive gadget that you will later crash for lack of expertise, MJX BUGS 6 is your alternative. It is not a drone made of carbon fiber as the most expensive, and lacks some security systems such as the stabilizer, but its easy operation, its brushless motors and the ability to see everything the drone sees through the control screen They make this perfect for beginners. Look no further, speed and adrenaline await you with the MJX BUGS 6.