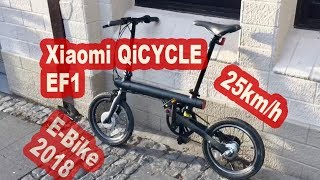 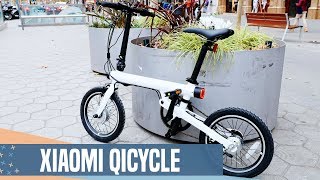 The torque sensor helps to make the journey around the city easy and enjoyable.

The gauge of twisting moment

Feel the effect of increasing the motor

The QiCYCLE – EF1 Smart Bicycle is equipped with TMM pressure sensors, which determine the force of the user’s efforts, after which the system can automatically control the size of the electric power supply. Travel around the city easily and fun.

An unprecedented experience of joyful cycling

Torque sensors determine the force of pressing the pedal. In accordance with the efforts of the cyclist, electricity is supplied, so your trip becomes more pleasant and exciting.

High-speed brushless bicycle motor with a power of 250W

Compared to a conventional engine, a high-speed brushless motor with a power of 250W is characterized by a low magnetic resistance, which allows rapid development of speed, the weight of the vehicle becomes smaller, and the user easily manages the lifts.

The onboard computer allows not only to easily and quickly switch four power supply transmissions, but also in real time monitors the following data: dynamic power, speed, distance, wasted calories, etc. All your data can be synchronized with your mobile phone and saved in the cloud, so that you can quickly and easily check or analyze travel data at any convenient time.

QiCycle bike has a built-in automatic transmission with four speed modes for efficient and easy vehicle control. Each transmission provides a certain gain. Switch gears according to your needs.

QiCycle bike has a built-in data monitoring system. Check the current bike speed, distance, power, calories and other data spent on the on-board bike computer. Improve yourself every day.

Smart application, synchronization with the phone

A unique Smart application can read information from the bike’s on-board computer, synchronize it with the cloud, so that later on you can view the data that interests you at any time and in any place. Check the state of the vehicle with a single click of the button in the application. Also use the navigation on your smartphone to enjoy the quick and easy journey.

The QiCycle bike is equipped with a Panasonic 18650 large capacity battery (like the Tesla battery), which allows you to cover a distance of 45km. The battery is placed in a frame and has a retractable structure, so it can be replaced and recharged separately from the bicycle.

* These data were obtained under the following conditions: load on the bike 75 kg, uniform speed 20 km/h, trip on a flat city road.

QiCYCLE – EF1 Smart Bicycle is equipped with a gearbox from the Japanese company Shimano, which has three modes of travel speed control: “light”, “standard” and “fast”. In combination with the electric motor your train will be pleasant and easy. But even if you do not resort to the help of strengthening the electric motor, your trip will be no less easy and fun.

A bicycle is one of the best methods of a wonderful holiday in the city. At a time when everyone is in a traffic jam, you will quickly and easily move forward without losing time. QiCycle bike has a very simple and lightweight folding design that distinguishes it from other folding bicycles with insufficiently safe design.

* The above data may differ from the actual data as a result of using the vehicle in several other conditions.

A bike weighing only 14.5kg

The frame of the bicycle, in which a powerful battery is placed, is made from an aluminum alloy. Even with a large capacity battery and a brush-less motor, the weight of the QiCycle bike barely reaches 14.5kg. The bike has an unusual design of single front and rear forks. The front seamless fork gives stability to the frame during driving, which makes it easier to drive the vehicle.