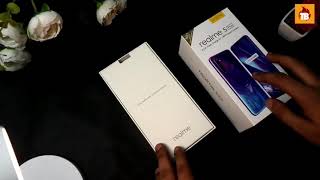 The Realme 5 Pro hasn’t done much visually, as the display is still 6.5 inches in size. The backside gets a new design with new colors and the camera unit grows with the two new sensors. The Realme measures R5 164.4 x 75.6 x 9.3 mm at 198g on the scale.

On the back, instead of a simple color gradient, you now use a polygon pattern, as you know it from the cheaper Realme smartphones. It is available in the colours Sparkling Blue, top purple bottom blue, and Crystal Green, top green bottom blue-green. The frame is optically contrasted, but there are no indications of a glass back.

Realme still holds on to the classic fingerprint sensor on the back of the R5, which is placed next to the camera unit. The power button is on the right of the frame and the volume rocker with the SIM slot (triple slot) above it is on the left. At the bottom there is a surprise, which is also necessary: a USB-C port including 3.5mm jack connector.

This measures 6.5 inches in the diagonal in 19.5:9 format and is interrupted at the top by a drop notch for the front camera. The IPS display resolves with HD+ 720 x 1600 pixels and thus achieves a pixel density of 270 PPI. Gorilla glass is not mentioned anywhere, but we are betting on version 5, as already with the predecessor.

Oppos Color OS 6, which is based on Android 9, is used on the realme smartphones. Realme itself is already working on its own system and wants to start next year. Updates come here regularly and also the Global Version of Realme 3 Pro has participated in the Android Q Beta. The system itself is clearly modified, but offers a large additional range of functions and is definitely a successful launcher. The Indian and Chinese versions can only be used in English, but the Google Playstore is pre-installed.

The Quad camera (12MP+8MP+2MP+2MP) has already been announced. This is only used in the new Realme X2 Pro, but we are more than satisfied with the Sony IMX 586 in the Realme R5. It was only recently proven in the Realme X2 Pro and will provide beautiful pictures.

The battery of the R5 is quite generous with 5000mAh. The Realme 3 Pro with its 4045mAh at least reached almost 12 hours in the PC Mark battery benchmark and thus recommended itself as a two-day smartphone. Charging is via VOOC Charge 3.0 with 5V / 4A. The battery is fully charged in 80 minutes.

In India, the Realme R5 will be released on Oct. 4 – here, too, one can only speculate as to when one will further increase one’s own Realme EU Store and supply it with global versions of the devices. So far only the Realme 3 Pro has landed here, the Realme X, for example, is still missing and is already available in China.