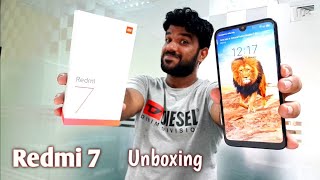 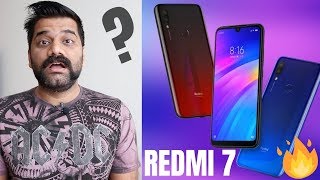 Redmi 7 is probably the cheapest full screen of waterdrop

Unlike the first six generations of the Redmi series with a small screen design, this Redmi 7 is equipped with a 6.26-inch drop screen that catches up with the mainstream. The resolution is only 720P, but the screen color is good. The phone screen we got was the same supplier as Xiaomi Play.

There are also two notable details. One is that the screen has passed the eye-protection certification of TÜV Rheinland, which has less damage to the user’s vision than the same-grade mobile phone screen. The other is the glass cover, and the Redmi 7 also uses the sturdy Corning fifth-generation gorilla glass.

The body of the Redmi 7 is made of plastic for cost reasons. The middle frame is matte, although the look is not as dazzling as the glossy Redmi Note 7, but the matte design enhances the stability of the grip, plus the curved 3D curved back panel, the phone feels quite good.

The fly in the ointment is that the connection between the back and the middle frame is not done, and the scratching feeling is more obvious. In terms of color, the back panel of Redmi 7 caters to the trend and adds a gradient color design. There are two gradient colors of Dream Blue and Charm Night Red, and also provides classic bright black.

Despite being an entry-level model, Redmi 7 is not awkward in its core configuration. On the processor side, Redmi 7 comes standard with Qualcomm Snapdragon 632. The SoC is based on the Kryo 250 architecture and consists of four big four small eight cores. The GPU model is identical to the 625/626, which is the Adreno 506.

We used Antutu to run points, with a total score of 100,000+. After testing, this set of hardware configuration is enough to ensure the smooth running of daily applications such as Facebook and Youtube, and even play special effects to play medium-sized games.

The camera is equipped with a dual camera for the Redmi 7. The main camera uses an OV12A10 sensor, 12 megapixels, 1/2.8 inch, and 1.25 micron pixels. This sensor has appeared on millet 5C, 5X and other models. The specifications are similar to those of the Sony IMX486 used by CUBOT MAX 2. Compared with the small-size sensor used in the same grade, the sensor has certain advantages in specifications.

In the case of better light, the Redmi 7’s camera experience is OK, the camera starts fast, and the focus speed is good, but the image is slower when the shutter is pressed. Once the lighting conditions get worse, the filming rate will drop significantly. After all, the price is here.

Real shot effect, Redmi 7 meets the daily life record is no problem, with automatic HDR and AI scene recognition, there are still small surprises in the shooting of backlights, buildings and other scenes, but it is a bit difficult to cope with night shots and random shots. The front is equipped with an 8 megapixel camera, the effect can only be said to be unsatisfactory.

Redmi 7 also puts a little thought into the small details of the daily use experience, such as the whole machine through the P2i splash-proof process, to cope with the daily water splash and rain. The infrared remote control and large battery that were absent on Redmi 6 returned in Redmi 7, but the phone does not support fast charging.

After our simple endurance test, the game loses about 6% in 30 minutes, and the online video loses about 3% in 30 minutes. Using the standard 5V2A charger, charging from 0 to 100 takes about 2 hours and 18 minutes. As a large part of the target population of the aircraft is the elderly.

The 18-month warranty on Redmi Note 7 continues on Redmi 7. A protective case is given at random. It is worth mentioning that this protective cover adds a dust plug at the position of the data interface. Unfortunately, there is no standard film. Although the screen cover is the fifth generation of Gorilla Glass, there are still many users who believe that the film can better protect the screen.