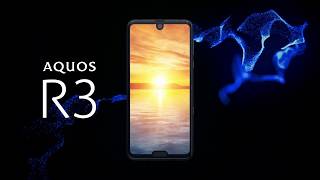 Sharp’s Aquos R3 debuted as a premium model, and yet another one in the manufacturer’s portfolio, with two screen notches – one for the game and one for the bottom. This model has a lot to offer. Last November, Sharp launched the Aquos R2 Compact, the world’s first smartphone with a double notch in the display. Today, the brand announced the Sharp Aquos R3, which also received a similar design, although it has much more powerful components.

The Sharp Aquos R3 features a 6.2-inch Pro IGZO display with Quad HD+ resolution (3120 × 1440 pixels) and a refresh rate of 120 Hz. In addition, the screen supports the HDR10 standard and has two cut-outs – one at the top, where the camera dedicated to the 16.3 MP Self (with f/2.0 lens aperture and AQUOS beauty mode), and the other at the bottom, where the touch plate with biometric sensor is placed. Without a doubt, such an appearance is not the most attractive, though understandable – Sharpe wanted to avoid a large chin size, while retaining the traditional fingerprint reader at the front.

Sharp Aquos R3 should offer users not only a very good image quality, but also sound, because it uses two stereo speakers with Dolby Atmos sound system. Added to this is Dolby Vision, which means that the smartphone supports two technologies to improve the quality of the emitted image.

Sharp Aquos R3 performance is the responsibility of the SoC Snapdragon 855, the most efficient unit in the Qualcommm range. However, this should not come as a surprise to anyone with a flagship. Snapdragon 855 consists of an 8-core CPU with a Kryo 485 core up to 2.84 GHz, and an Adreno 640 graphics chip that works with 6GB of RAM. So Sharp, like LG, conservatively approached the amount of RAM, although it is completely sufficient. 128GB of built-in memory is reserved for data and applications.

On the rear panel of Aquos R3 there is a double main unit located vertically in the upper left corner on an island protruding above the face. The 12.2 MP main sensor features an f/1.7 aperture and technology to combine four adjacent pixels into one, which can only mean one thing – Samsung’s ISOCELL Bright GM1 sensor is used, which in fact has 48MP.

The second camera is a wide-angle (125 degrees) 20MP wide angle lens with f/2.4 light. The smartphone is also equipped with artificial intelligence camera functions such as AI Live Story and AI Live Shutter. The energy efficiency is provided by a 3200 mAh battery with support for 11W Qi wireless charging. Without a doubt, it is the weakest piece of equipment in this model.

Despite the fact that Sharp Aquos R3 debuted its suggested retail price and the launch date have not yet been disclosed.