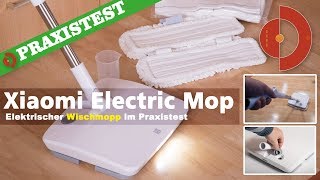 When I started with the web I could not think that one day I would be doing an analysis of a mop Xiaomi and yet today I will tell you about the SWDK-D260, the first product of this style that has appeared in the store of the Chinese giant.

We already had the famous Xiaomi Vacuum, in fact, yesterday you would get tired of reading articles about the new model just presented and that as a great novelty incorporates a mop to scrub our floors, well, that’s at least what they want us to believe, if you look at the analysis of the iLife V7s you will realize that these inventions are just that, inventions, but lack practical utility. But let’s go back to our mop, the one that does clean our floors effectively.

After receiving it at home the first thing we must do is to assemble it, at least the pole or mast or whatever you prefer to call it. It consists of four elements of easy anchorage, two of them are metallic and both the central zone and the handle are constructed in plastic. Neither the appearance nor the finish are bad, but I think it would have been more appropriate to have used metallic material for the whole set, especially for the kneecap where it is fitted to the base, since it is the one that will suffer most with the passage of time.

Something that doesn’t convince me is not a plug that we found at the end of the handle in translucent gray, it’s as if they had pulled back at the last moment to include in that area the load taking. And since we’re talking about load taking, say that this is located at the back of the base of the mop, after a rubber plug.

I’m sure many of you have seen some hand vac that is recharged by placing the handle connected to a charging base, this is really what you should have done, instead of placing the socket in such a low area. You can’t say it’s comfortable, let alone recharge it.

The built-in battery is 2000 mAh which is more than enough to clean a house, unless you have a small house; in that case, you will have to recharge the battery, a process that takes about an hour. Once everything is assembled we only have to choose the type of mop we are going to use, in my case I have opted for the most rugged of all, to put them and remove them is very simple because it has velcro to perform that action.

Fill the water tank with the cup we have for it and light the mop. As soon as you begin to handle it you realize several things, it does not require any effort since with the vibration of the motor the mop almost floats by itself on the ground.

If there are resistant stains just press the button on the handle to spray water through the ejector incorporated in the front of the base and after a couple of passes the dirt will become part of history. The front light illuminates more than you expect but it is also not enough to freely illuminate areas that are completely dark. But the main flaw I see in the Xiaomi SWDK-D260 is that it doesn’t fit into every corner or under every piece of furniture.

With the handle completely down you need 10 centimeters high to allow its passage and the base with its 30 x 28 centimeters also does not allow us to reach corners that we all have at home as behind the toilet cup, bidet or similar. During the test clean on platform, rugged non-slip floor and two different service floors. Both the platform and the floor of the blue service were cleaned properly and were very well, however the black floor of the other bathroom let you see the traces of water, which gave the feeling of not cleaning properly, even when the floor was clean. I think this is because I only used water, without any soap solution or specific mop cleaner.