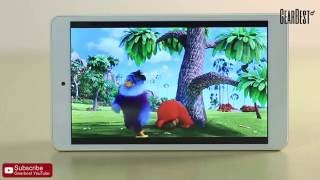 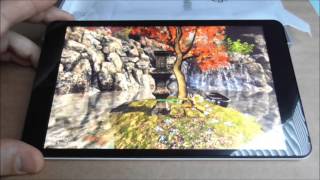 If you buy for yourself, you don’t have to worry about 20€ more or less. With a rollout of 50 or even 100 pieces it looks different: With the P80h, Teclast serves all those who want to acquire a tablet sufficient for business applications at a very low price.

Let’s start with the obvious. The low price takes its toll in the form of the very spartan equipment: the tablet only comes with a USB cable, the wall-wait must be ordered separately. Otherwise we can’t report anything really negative about the workmanship: the matt white plastic case is so far solidly processed. The weight of 335 grams is in the range of the “tablet standard”, but the maximum housing thickness of 10 millimeters is somewhat high. Teclast is not stingy when it comes to interface selection either: The device even has a MiniHDMI socket for connecting monitors and other image output devices. A USB host is rare in this price range: USB sticks and card readers can be connected with a suitable cable!

The display comes with the rare resolution of 1280×800 pixels. The aspect ratio is better suited for displaying documents. In direct comparison with devices with FullHD the lower resolution is visible – who does not miss a comparison device and deals with the displayed contents, will soon get used to the screen. Under strong sun, however, the display is difficult to read even at maximum brightness. It should be noted that the Teclast sticker attached by default can be removed. The transport film can thus also be used as screen protection.

Camera: weak but usable – The rear camera, which goes to work with a maximum resolution of only 2MP, is not particularly impressive from a technical point of view. If there is enough light, it provides usable photos.

Of course, things look different in low light. In “normal” images you can only see contours, while photos of documents – if at all – are only usable after the third shutter release.

Teclast offers its tablet in two versions: one with X86 CPU and the version tested here with a four-core CPU from MediaTek. The processor is supported by one Gigabyte RAM and 8 Gigabyte ROM – the latter can be extended by a MicroSD card.

The GPU’s behavior is interesting: immediately after restarting the tablet, it creates 40FPS in Epic Citadel and then drops to around 24FPS – immediately and without significant warming. This makes it clear that the device is in no way suitable for gambling.

No disco tablet – In English there is the term “somethings gotta give”. In the case of the X80h, this is the speaker – its volume is much lower than the more expensive devices. Even with headphones connected, playback is quiet.

At least: with sufficiently high-quality earphones, there are no excessive distortions. We let Stink’s Anglo-Saxons run through Neuyork on a trial basis – with the exception of the lower volume, no major differences to the “more established” competitors were noticeable.

Chinese software – Teclast integrates the Play Store into the Android 5.1 running on the tablet and enemies of Chinese characters will not be happy with the device as the tablet comes with some programs tailored to the Chinese market including the corresponding notifications.

An important upgrade is the installation of your own keyboard software, because Google’s Chinese keyboard sometimes acts a bit strangely. Otherwise, we did not notice any peculiarity during the test – Jiayu’s well-known preference for “forgetting” advertising software does not seem to be the case at Teclast.

The P80h is certainly not a multimedia cracker: 1GB RAM and the rather weak CPU provide for jerkers in games despite the low resolution screen. From a businessman’s point of view, however, this is desirable: the computing power is sufficient for productive tasks. If you are looking for an inexpensive tablet for reading files and websites, you can’t go wrong with the device available at GearBest for around 50€ – it’s more convenient than reading on a five-inch display!