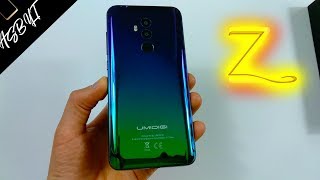 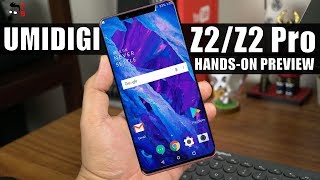 UMIDIGI Z2 Pro is a mid-range smartphone with a number of distinctive features, which can be bought at a price of $370. Its main feature immediately catches your eye – spectacular design, the original color of the back cover, which beautifully shimmers in the sun and two main cameras, which should prove to be quite good under different conditions of use.

The case of the smartphone UMIDIGI Z2 Pro is entirely made of glass, the metal only the side frame, which went for the sake of giving the strength of the structure and its protection in the fall. The front side of the original does not shine, because its design is identical to the iPhone X (there is a characteristic notch from above, the rest of the frames are minimal).

The only thing that the bottom indent is much wider than the original. In a large depression, the main sensors, a front-end and a speaker of speech were placed on top. But in this case it remains a mystery why to make such a large dredging, because all these elements do not require so much space that competitors successfully prove, in which the indent is twice less.

The phone UMIDIGI Z2 Pro is not in vain made of glass, because due to this, it has the support of wireless charging with a power of 15 watts. Buy UMIDIGI Z2 Pro in Gearbest can be in several options for the design of the case – black, blue, dark blue, and purple. The last two colors were especially beautiful. Violet is a gradient that looks different depending on the angle of inclination. The color can vary from purple to blue. And in the dark blue UMIDIGI Z2 Pro a pattern appears, which varies depending on the angle at which you are looking at the phone. The effect is very interesting and highlights the device against the background of competitors.

The UMIDIGI Z2 Pro 128Gb uses a dual front camera, which opens up huge opportunities for shooting a loved one, including spectacular Bokeh. The main camera is also dual and horizontal (Apple’s ideas do not give rest to Chinese manufacturers). It has a resolution of 16 and 8 Mp with aperture f / 1.7 and f / 2.0, respectively. I’m glad that the smartphone uses the USB Type-C, along with which appeared support for fast charging technology.

The technical characteristics of the smartphone UMIDIGI Z2 Pro are based on the 8-core Helio P60 processor, which is accelerated to 2 GHz and works together with the Mali-G72 video chip. Thus, all games will confidently go on the average schedule, and some will go even at the max. The interface is faster and more stable.

The amount of memory is one of the advantages of this smartphone, because at an affordable price we get 6 GB of RAM and 128 GB of internal memory. The battery life should be very impressive due to the use of a 3550 mAh battery that supports 18W fast charge technology. A large 6.2-inch Full HD+ display with a pixel density of 402 ppi produces a juicy and well-detailed picture.

The UMIDIGI Z2 Pro supports NFC, Wi-FI and Bluetooth 4.2, which makes it a worthy option for purchase.