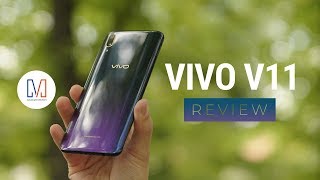 The new phone Vivo NEX S is the main flagship of the Chinese manufacturer, which showed that in order to achieve display-free display, it is not necessary to leave a notch on top. There is a much more beautiful and modern solution – the sliding mechanism of the camera, so that no functional elements need to be placed above the screen.

As for Vivo V11, the manufacturer continues to experiment, suggesting an alternative solution – a point in the center of the screen, in which the front camera is embedded. It looks very interesting smartphone, certainly better than most models from competitors who have received a single quote following the example of Apple.

The Vivo V11 belongs to the average price category, but despite this it has received a number of interesting technologies on its board, which are more typical for flagships and not for everyone. All of them will be discussed in detail as part of our review, after reading which you will learn everything about the characteristics, design, performance, cameras and other important aspects of the phone. His main feature was a fingerprint scanner, built directly into the screen.

Most of all, the design of the screen stands out, which, with a 6.41-diagonal diagonal, is not felt immense due to the fact that along its perimeter there is practically no frame. This allowed him to occupy 85% of the total area of ​​the front panel, which puts him on the same level as the most frameless smartphones in 2018. Of course there is a framework, but they are so thin that they are hardly noticed after a couple of days of use. And they are about the same on almost all sides, while most other devices have a lower edge much thicker than the others, even if there are no functional elements on it.

A drop-shaped notch was left above the Vivo V11 display, where a 25 megapixel self-camera was embedded. Slightly above, directly at the top, there is a spoken speaker. This is even better than the technology used by the manufacturer in Vivo NEX S, where sound is transmitted by vibration in glass. On paper, everything looked extremely promising and tempting, but in reality everyone around you heard what you were talking about, which is not good. The usual speaker in this regard is much better, as our review showed.

The Vivo V11 case is assembled from glass, which made it possible to get a beautiful gradient shade on the back side. On the review we visited a model that shimmers from blue to dark blue, depending on the angle at which to look at it. All the benefits of this effect are difficult to assess from the photo, but in life the solution looks really great and gives the design originality.

The characteristics of the Vivo V11 are built on the average in performance of the Qualcomm Snapdragon 660 processor, which received 8 cores with frequencies up to 2.2 GHz. In addition to it comes 6 GB of RAM, as well as 128 GB of internal memory, which will suit even the most demanding users. For the average level, the filling is top-end and in some respects even surpasses the flagships. In Antutu, the smartphone shows expectedly good results.

The Vivo V11 runs on Android 8.1, on top of which Funtouch OS 4.5 proprietary shell was applied. It is because of it that many bypass the manufacturer’s equipment. There is almost nothing left of the pure Android, but there are a lot of similarities with iOS. The similarity of almost 100% is the design of the settings, the camera interface and the gallery. The most inconvenient is that the quick settings panel is drawn from below, as on other Android phones it is located in the upper curtain, which is more usual and convenient.

For the autonomy of the Vivo V11 starry night, the battery responds to 3400 mAh. In addition, as shown by the review, it supports the technology fast charging Quick Charge 3.0 with a capacity of up to 18 . It is this charger is standard. From 0 to 45%, the smartphone charges in 30 minutes , and it takes a little more than an hour to fully charge.

The camera in Vivo V11 double with a resolution of 12.0MP and 5.0MP. Unlike competitors, the optional sensor is not used for optical or even hybrid zoom without loss of quality. Its only purpose is to gently blur the background when photographing in portrait mode, which the sensor copes well with. When photographing it is possible to change the focus point, as well as adjust the degree of blur, making it stronger or weaker.

Vivo V11 is a decent representative of the average price category, the disadvantages of which include the lack of NFC and the use of a microUSB port, which does not fit in with the price. In all other respects, the novelty is good – the original design with a drop-shaped neckline on top, high-quality high-resolution display, a powerful processor, good cameras, memory capacities and autonomy. This is a good choice for those who do not use NFC and want to get a beautiful, but at the same time powerful device for a reasonable price.