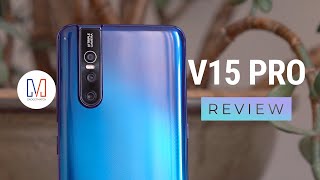 Vivo V15 Pro has been officially launched. The latest average Chinese producer received a triple camera, a retractable selfie webcam and solid components that, despite appearances, do not cost a fortune. The bag with the new products, according to the plan, decided today to solve the Chinese Vivo, which officially showed Vivo V15 Pro – a well-equipped and priced smartphone. Discover the components and price of Vivo V15 Pro, which has the potential to become the technological king of the mid-range. Is it a worthy rival for Xiaomi and Samsung?

The Vivo V15 Pro attracts attention at first glance with an Ultra Full-View display with no indentation and a sleek rear panel design. The screen is surrounded by very narrow frames and fills 91.64% of the front panel area. But coming back to technicalities, the screen was Super AMOLED and spanned 6.39-inch at Full HD+ resolution.

Inside the sensor there is an integrated biometric reader, which is a commonly used technology even in cheaper Vivo smartphones. The lack of a notch is due to the presence of a slide-out camera for a 32 MP self – the precursor model of Vivo Nex also included a movable camera, but had only 8 MP.

Inside the Vivo V15 Pro is a Snapdragon 675 chip, an eight-core 2.0GHz unit that utilizes two Cortex-A76 and six Cortex-A55 cores. This is a very solid chipset created in 11 nm process and received 6 or 8 GB of RAM to help. On board was also a battery with a capacity of 3700 mAh, which is supplemented with a quick charge via a micro USB connector – outdated input is one of the few disadvantages of the model.

Vivo V15 Pro received three vertical cameras that were placed in the same place as the retractable webcam and aesthetically complemented the whole. The main camera has 48 MP, f/1.8 aperture and uses the Samsung ISOCELL GM1 sensor, which can be found in Redmi Note 7, for example. The second mesh has a resolution of 8 MP and wide-angle properties, and the third lens is used to collect information about the depth of the image.

The manufacturer has not forgotten about the AI Super Night Mode and several other features using the so-called artificial intelligence.

Finally, it is worth mentioning that the latest model works under Android 9 Pie with the manufacturer’s overlay, and also received appropriate technical equipment including a headphone connector, 4G VoLTE, WiFi 802.11 ac, Bluetooth 5 and GPS. In some regions there will also be a variant with NFC.