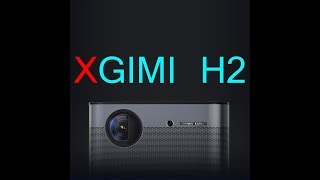 Externally, the gadget is similar to its predecessor: XGIMI H1.

The same square form factor, the same lens arrangement, the same support for the magnificent Harman Kardon audio. However, according to technical parameters, the new projector in many respects surpasses its colleague.

The main differences between the two projectors

In more detail, H2 has received from its creators:

The H2 projector has already been awarded prizes by such authoritative industrial design competitions as Reddot, IF and CES.

Thanks to such innovative technologies and powerful technical parameters, the XGIMI H2 projector is perfect for watching movies, sports programs, entertaining programs, and anything!

So do not worry that after viewing you will forget to close the shutter.

Thanks to the design progress of the creators of the device, its lens is under reliable automatic protection! For the speed of work is responsible for a powerful processor Mstar 838 CPU, graphics Mali T820 MP3 GPU, RAM 2 GB and 16 GB of internal memory.

And at the end of this extremely “tasty” picture of a cool gadget, we mention the support for Bluetooth 4.0 and dual-band 2.4 / 5GHz Wi-Fi.

As for the interface, besides the LAN and SPDIF, the projector has got HDMI, USB 2.0 and USB 3.0 ports.

A cool projector, is not it? And very soon it will appear in our network of stores!

The LONGER Orange 30 SLA 3D printer is an affordable option when it comes down to 3D printing with photo resins. It offers some...