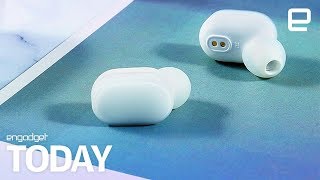 The Chinese company Xiaomi has announced a fully submersible AirDots wireless headphones, which are said to provide high-quality sound.

Back in 2016, Apple really revolutionized the market of wireless headphones by introducing a device called AirPods, which still enjoys incredibly great popularity around the world. This gadget for personal listening to music is good in almost everything, but it also has a number of drawbacks, all of which will be fixed in Xiaomi Mi AirDots.

According to currently available data, the Chinese corporation is completing the creation of its own wireless headphones. They will be supplied with a special case designed for recharging and carrying them. From a single battery charge, the headphones can work for 3-4 hours at an average volume level, and thanks to the case, these figures can be increased three times, because with its help each of the two headphones can be recharged at least three times.

The Xiaomi AirDots Youth Version includes independent modules for the left and right ear. Used 7.2 mm emitters capable of delivering saturated low frequencies. On the outside of the modules, a sensor control zone is provided. Users will be able to switch tracks, answer phone calls, give commands to activate the voice assistant, etc.

To communicate with a mobile device using a wireless Bluetooth 5.0. Headphone weight is only 4.2 grams. The claimed battery life on one battery charge charge reaches four hours in stereo mode and five hours in mono mode. The package includes a special charging case that provides a total autonomous operation time of up to 12 hours.

The Xiaomi AirDots TWS Earphone Youth Version are made in white. It will be possible to purchase a novelty at an estimated price of $25.