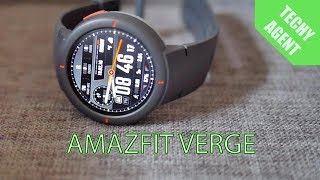 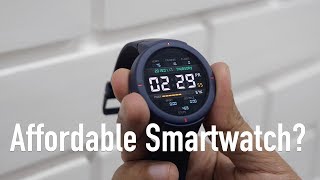 Huami, with monetary support from Xiaomi, is one of the leading wearables manufacturers. Especially the Amazfit series has especially convinced us with the Amazfit Stratos and the Amazfit Bip. Now a new product is in the starting blocks: the Huami Amazfit Verge.

After the first leaks to the new smartwatch, the name “Huami Amazfit X” stood in the room – this was probably only a temporary solution. Since September 17, 2018, the Huami Amazfit Verge is in the digital stores that are not great at the Amazfit Stratos different, but sets the priorities differently.

The pictures show a very relaxed design concept behind the Verge. Here you do not deviate so much from the first Amazfit Pace and the Stratos. The manufacturer relies once again on a 1.3 inch display; a diameter that has become more or less standard by now. The panel used is an AMOLED display protected by Gorilla Glass 3. The watch itself is made of plastic, the band of the watch is made of silicone. This results in a relatively low weight of 46 g on the wrist. In addition, the watch has an IP68 rating, but is not meant to go swimming with it.

Inside, you once again rely on a dual-core processor with a clock frequency of 1.2 GHz. This pairs the Amazfit Verge with 512 MB of RAM and 4 GB of internal memory. We also know this combination from the predecessor, the Amazfit Stratos. However, this is not a criticism in my opinion, the performance of a smartwatch is rather secondary. As long as everything runs smoothly and you tune the software well, the hardware plays a secondary role.

One feature that we are particularly proud of is the very accurate pulse measurement over a period of 24 hours . By means of this precision one should be able to identify cardiac arrhythmias or even atrial fibrillation quickly. This is achieved through a new high-precision sensor that provides 98% accuracy and uses up to 80% less power. In addition comes newly developed artificial intelligence . A similar feature we know from the new Apple Watch Series 4.

It gets really exciting with the additional hardware. An important feature is NFC . On the one hand, this could be used for faster pairing with the smartphone, but of course also for contactless payment options. That would be in China then once AliPay, which does not apply in Europe. From November UnionPay should follow. There are also GPS and GLONASS, WiFi and Bluetooth 4.0. On a SIM card slot is apparently dispensed with.

Also of interest is the integration into the ecosystem of Xiaomi. The watch has a built-in microphone, which allows you to use the digital voice assistant Xiao AI. Plus, it integrates with Xiaomi’s Mi Home app, which allows you to control various Xiaomi smart home devices from their smartwatches. However, we suspect that the Amazfit Watch app we know from Stratos will serve as a regular app. About this you can probably install your own Watchfaces on the clock, if you are not satisfied with the 11 pre-installed.

So many features usually speak for a short battery life. That’s only partially true. Even if one does not specify an exact mAh number, the Huami Amazfit Verge should get by with a charge for up to five days. This assumes that you do not use energy-intensive processes like GPS positioning and sports modes every day. With daily use, the runtime should at least halve.

To be honest, we were a little relieved when we saw OVP for the Huami Amazfit Verge. In China, it is about $120 to have the equivalent, with the impact of China shops, we expect a price of $160 to $180. The question is whether the Verge acts more as a successor to the Stratos or even as an alternative to Stratos coexist. Unfortunately we have to dampen the anticipation at this point a bit. It usually takes at least two months for a global version of an Amazfit Smartwatch to appear. The Amazfit Verge has been available in China since the official launch!

What does the Huami Amazfit Verge sound like to you? Would you be interested in a global version of the watch?

Sometimes with the promotions that we also publish through our pages you can buy a cheap 3D printer, but to get one even with...

Prime Day: A big wave of discounts hit from TikTech, Save...