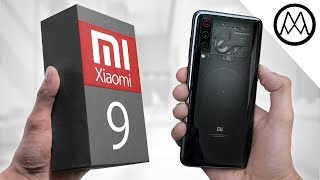 As expected, the technical specifications of the Xiaomi Mi9 are at flagship level: it is one of the first smartphones ever to feature Qualcomm’s brand new Snapdragon 855 chipset. In addition, there is a choice of 6 GB or 8 GB RAM and 128 GB internal memory on board. The Mi9 Transparent Edition, which we’ll talk about later, offers even more. With 6 GB RAM, the Xiaomi Mi9 in China costs the equivalent of around 390 Euros, for 8 GB RAM the manufacturer charges slightly more than 430 Euros. In the Middle Kingdom there will be a black, a blue and a violet color variant to choose from. The “worldwide” launch will take place later than in China.

The AMOLED display of the Xiaomi Mi9 measures 6.39 inches diagonally and resolves in Full HD Plus. There’s a fingerprint sensor on the screen. The 20 MP front camera sits in a small notch that resembles a drop of water. For Selfies, a software-supported portrait mode is available. But more interesting is the 48-MP triple camera on the back.

By default, it combines several pixels to allow for better photos in the dark (“Pixel Binning”). The images then have a resolution of 12 MP. But by switching to the Pro mode you should actually be able to take 48 MP photos, according to the Android Authority. The triple camera consists of the 48 MP main lens, a 12 MP telephoto lens and a 16 MP ultra wide angle lens with a 117 degree field of view.

When you take pictures with the ultra-wide angle lens, an artificial intelligence should correct any distortion that may occur at the edges of the picture. In addition, the camera app tells you to use the ultra-wide angle lens – if this makes sense for a particular subject. The lens also offers a “Super Macro Mode” for shooting at extremely close range.

The Xiaomi Mi9 SE is a slimmed down version with a smaller AMOLED display: The screen measures only 5.97 inches diagonally, but also houses a fingerprint sensor. The water drop notch is also available, in which a 20 MP self camera is located. On the back there is a triple camera with 48 MP, 8 MP and 13 MP lenses.

As with the standard model, the battery has a capacity of 3070 mAh, but can only be charged with a maximum of 18 watts. But the biggest disadvantage is the weaker chipset: The SE model has to be content with the Qualcomm Snapdragon 712 (upper middle class), the 6 GB RAM and optionally 64 GB or 128 GB internal memory. The cheaper configuration in China costs about 260 Euro, the more expensive one about 300 Euro.

The Xiaomi Mi9 Transparent Edition rounds off the top of the lineup. The special model, which costs the equivalent of 525 Euro, comes with 12 GB RAM and 256 GB internal memory. In addition, the manufacturer uses a particularly fast (f/1.47) camera.

The partially transparent back is in the “Alita Battle Angel” look and should therefore appeal especially to manga and anime fans. Buyers who don’t belong to this group will enjoy the partially recognizable internal components. Unfortunately Xiaomi decided against a global release of the Mi9 Transparent Edition.