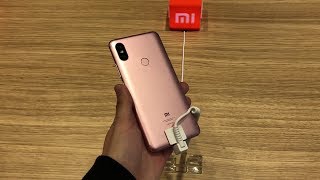 Xiaomi apparently takes it for really every budget and any requirements the right device to have. Although we were a bit confused in the Redmi series thanks to the Redmi 5 Plus and Redmi Note 5 (Pro), there is now a new Redmi offshoot: the Xiaomi Redmi S2. This is the starting signal for the new Redmi S series.

In terms of design, Xiaomi clearly follows the newer Redmi Note 5 and the Xiaomi Mi 6X. This can be fixed to mainly at the back of the case. The front comes in contrast to the modern Redmi design. It sets in terms of display also on a 18: 9 aspect ratio with a screen size of 5.99 inches. Since it is budget-oriented, of course, the Redmi 5 Plus comes to mind, however, donated to the S2 only an HD resolution of 1440 x 720 pixels. The screen size is already borderline.

In addition to the dual camera on the back, the fingerprint sensor also appears on the back. There are no big surprises there, if you already know the other current Xiaomi models, there is a certain likelihood of confusion.

That one has to do it here with a budget smartphone, also confirms the processor choice. The Snapdragon 625 is allowed to do its work here as well. The eight-core processor is now an old acquaintance, the eight Cortex A53 cores clock at up to 2 GHz. This is still a good CPU, which has meanwhile been used in several devices and, for example, has already been used in the Redmi Note 4. In terms of memory you probably have almost the free choice. The RAM varies between 2.3 and 4 GB, the internal memory between 16, 32 and 64 GB.

Since this actually sounds mostly after the Redmi 5 Plus, Xiaomi reserves a distinctive feature on the camera. As already mentioned, there is a dual camera available. It probably consists of a 12 megapixel and a 5 megapixel sensor. We also find the same combination in the Redmi Note 5, so it’s likely that it’s the IMX486 sensor. On the front seems to be a 16 megapixel camera in use. This is probably where the “S” in the name sense, because that probably stands for “Selfie”. Therefore, it is also quite possible that the front camera offers AI features to shoot better self portraits. The battery size of 3.080 mAh turns out to be slightly smaller than the 5 or 5 Plus, which I find somewhat surprising.

Since this is a new smartphone from Xiaomi, it can be assumed that the latest MIUI will be used, based on Android 8.1 Oreo. As recently announced two new Android One devices from Xiaomi, it may eventually become the next Android One smartphone. In addition, very likely the Mi A2 in the form of Xiaomi Mi 6X.

If you have not turned off now because of confusion, you can look forward to the 10th of May . Then the Xiaomi Redmi S2 could be officially presented. In principle, it is a Redmi 5 Plus with the camera of a Redmi Note 5 without Full HD resolution and therefore somewhat superfluous in my eyes. how do you see it?