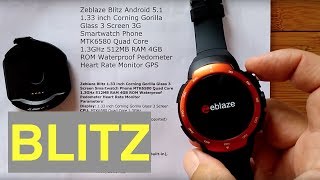 The materials with which smart watches are manufactured are the main key to determine if it is a model designed for sports and exercise lovers, or if it is a design alternative to be combined with any clothing. In this case, the first category of Smartwatches has one of the most attractive devices of recent times: Zeblaze Blitz.

Zeblaze Blitz is a smart watch of Chinese origin that aims to consolidate as an option that meets the vast majority of functions expected from this type of technology, but without meaning a high price to the public. Thus, its managers have opted for a total manufacture in rubber but without losing a good visual style.

In the first instance it is worth noting that two very different designs have been chosen in this watch, since one combines black on its strap with orange for the frame of its dial, something that makes it quite different from the other watches that can be found. The other uses a mixture of black and silver gray that at first glance gives the wrong impression of having steel materials.

The dimensions of Zeblaze Blitz are 4.90 x 4.90 x 1.30 cm, while its total weight is just 68 grams. Logically, there are several interfaces on the main screen that show the time in analog form, while the rest of functions and sections have their own organization despite working under Android.

Many of the watches usually do not even indicate their internal components or prove to be extremely simple, since their total dependence on the smartphone allows them to save hardware expenses. However, the greater independence of Zeblaze Blitz has led him to use elements that are usually observed in Smartphones.

Thus, the processor chosen is a MediaTek MTK6580 quad-core running at 1.3GHz, accompanied by 512 MB of RAM, Mali-400MP GPU, 480mAh battery and 4 GB of internal storage space, but no room to expand through microSD. The operating system is none other than Android in its version 5.1 Lollipop.

Regarding the screen, this is a 1.3-inch touch panel that has a very good resolution of 360 x 360 pixels and Corning Gorilla Glass 3 protection that allows you to better resist any hit and scratch you suffer unintentionally. Even, its IP67 certification makes it easy to have it at all times, since it easily supports contact with water and dust.

The concept of autonomy of Zeblaze Blitz is basically explained by the inclusion of a microSIM slot that makes it viable to function as a telephone in its basic communication functions. With acceptance of GSM + WCDMA networks, not only can you receive or send SMS, but also connect to the Internet via 3G.

Also, while the function of remote management of the phone camera is widely used in the market, Zeblaze here has surprised to add a sensor on the right side of it. It has a minimum quality of 2 MP, however, it can be used to capture a photo at any time at the touch of a button.

In the first instance, since it also has Wi-Fi connectivity and its native Android operation, it is possible to navigate or use a wide variety of applications without having to resort to the Smarphone at any time. Also its Bluetooth 4.0 connectivity makes it possible to receive notifications in real time and synchronize measurement data instantly.

Zebraze Blitz does not lack a heart rate sensor, which consists of a chip manufactured by Samsung for its own models, so its effectiveness is guaranteed. It also says present the pedometer to account for steps, distance traveled, calories burned, sleep quality or even send reminders of sedentary lifestyle.

To finish, the included GPS makes it possible to get the correct coordinates to reach a certain destination, while it can play multimedia content formats such as JPG photos, MP3 songs and videos in MP4 (it has a speaker).