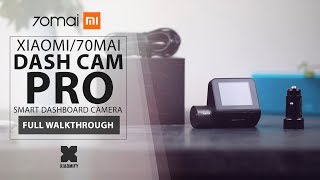 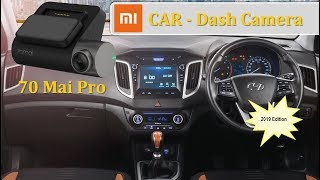 Xiaomi 70mai Dash Cam Pro – a new level of DVR, which received many new features and is a logical continuation of the popular 70mai Dash Cam. The device was created with a focus on increased security and security system during parking. Specifications have also changed.

The line of video recorders from the company 70mai, which is actively supported by Xiaomi, was replenished with the Pro model. The device received a display and a more modern filling. The optical module is represented by a Sony IMX335 sensor and six lenses with a viewing angle of 140°.

The developers added the ability to record in Timelapse mode (fast shooting) to the new model . This is very convenient if the car is parked and permanent recording is not required. As soon as the G-sensor detects movement, the device will begin recording a full-fledged video clip. This mode significantly increases the security capabilities of the recorder.

The device received an additional slot for installing special modules that extend its functionality. These modules will be sold separately. Here they are:

At this stage, the 70mai Dash Cam Pro is only being prepared for release. Buy it will be possible after mid-October, the estimated price of new items about $80. I am sure that many functions have not yet been announced, we will definitely supplement the article as soon as the information appears.

Xiaomi 70 Mai Pro is the newest car video camera from the Chinese manufacturer and has been available for some time in the Chinese store. At the same time, it is the best room in their portfolio. It features a 5 megapixel Sony sensor capable of shooting at a maximum resolution of 2592 × 1944 pixels, and the camera’s shooting angle is 140 degrees, ensuring the capture of large and detailed images.

The files are stored on the MicroSD memory card (supports up to 64GB), using the H.264 technology, delivering excellent image quality at the smallest size. You can access or copy video clips with the dedicated Android and iOS app. With the “DeFog” algorithm, it provides crisp and detailed images when out of snow or raining.

With the motion sensor activated, the camera can start recording even if the machine is not on as long as the battery is charged, and in this way you will also have recordings when the car is parked. The internal battery has a capacity of 500 mAh and charges when the camera is turned on. Optionally, you can also buy a GPS sensor, which once attached, will provide information on speed, acceleration and geolocation. In case of an unfortunate incident, you have all the evidence to support your innocence.