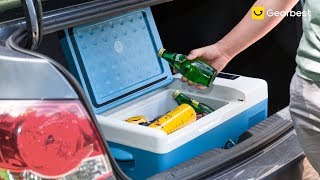 The summer is here, and then a normal chiller is very good in the car. I say it is normal, not what you are trying to keep cold with ice hockey, not one that would have to cool a 20-32-liter box with a 2×2-centimeter Peltier cube.

Normally what do we expect from a cooler? Of course, work in the car, don’t have him twenty. Be able to really cool, not just imitate cooling. It should be installed as quickly as possible. By default this would be what is important. However, here is the Alfawise B15, which is much more than that, but it really provides much more!

Let’s start with the fact that this 15-liter box really works as a compressor, like a traditional home refrigerator. This is pretty much about being able to cool, or even if you want to, freeze it. Its operating range is between plus 20 and minus 20 degrees Celsius, and it also produces a performance that can cool plus 25 degrees in one hour minus 20 degrees. That’s what he’s about to say.

If you thought that the line of extras came to an end here, they were very wrong! It is important to have a cooling box with as many power sources as possible. In the case of Alfawise B15, there is no fault, because you are driving in cars with 12 volts and 24 volts, but if you arrive at the destination, you can plug it into 220 and cool it down. In addition, if you want to include a Lithium-Ion battery, if you do, you will get wireless operation, and the cooler can also serve as an external battery, charge your phone or tablet, or simply plug in the light bulb into a power outlet.

We could say that this is a lot of good, but I can still continue. The interesting thing is that the Alfawise B15 cooler has got a Bluetooth connection. You can connect your phone and control the box through the application downloaded to your phone. That is, the cooler in the trunk, you can adjust the temperature in the seat, and easily set the temperature to be cold and brew when I get out. Because the compressor is relatively large in the box, especially when the compressor starts. For this reason, there must be some protection to avoid overloading the car’s electrical system. Of course, this can be found in it. Automatically monitors the car’s electrical system, the amount of voltage and, if necessary, stops itself when the starter is turned on.

Maybe you already understand why I compared this cooler to a Rolls-Royce. He knows everything, and much more. It is not really a chiller, but a cooler-sized refrigerator that easily fits into the trunk, and you can even take the frozen goods so that it doesn’t melt. Of course, there is also a price for knowledge, we do not get it for the price of an ice-cream chest. It is true that, according to the manufacturer, the structure can serve us for more than 10 years due to the built-in protection, so if we break down the cost to the edges it doesn’t seem to be as much as we can find on the price tag.

If you feel like a 15-liter capacity, you can buy it a little more expensive, but you can still buy a box called Tecney CX40, which has all the capabilities of the Alfawise B15, with a capacity of 40 liters.