Alfawise U20 Plus - Video 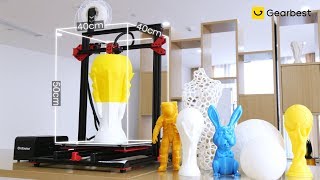 Alfawise U20 Plus - Specs

No matter if you are a beginner or a second device for the professional – the Alfawise U20 Plus surprised in our review as a solid 3D printer in the price class of devices for less than $400, which is suitable as a 3D printer with large installation space for both user categories. What 3D printer beginners should be pleased about, the Alfawise U20 Plus requires only a small amount of time and effort for assembly, so that the assembly of the device after delivery hardly takes more than 5 minutes. Of course, the Alfawise U20 Plus also has weaknesses, which will also be discussed in more detail in the following test report and solutions will be presented. Despite some flaws, the low-cost 3D printer from China convinced with a fair price-performance ratio and offers all users interested in a 3D printer with a large installation space an interesting, but above all very inexpensive alternative to other 3D printers with a installation space larger than 0.6 m³.

Information about the manufacturer Alfawise: The Alfawise brand is a private label of the Chinese online retailer GearBest. Initially GearBest sold TV boxes and smart home gadgets, but the increased demand for 3D printers has become so lucrative for GearBest that they are now pushing their own 3D printer brand. The 3D printers are not manufactured directly by GearBest itself, but by well-known manufacturers such as Anycubic, Creality3D, Geeetech and others. This makes the supply chain and profit margin more predictable, which also has a positive effect on the final price. Before we start with a test print, we would like to introduce the inexpensive 3D printer Alfawise U20 Plus from the technical side.

Neither new nor experienced do-it-yourself enthusiasts will be able to resist informing themselves about the Alfawise U20 Plus when they read something of low price, large installation space and fast construction. Traceable. With dimensions of 400 x 400 x 500 mm, the Alfawise U20 Plus has an extremely large construction volume that is also suitable for large 3D printing challenges. With the Alfawise U20 Plus 3D printer kit, users can print without stress, as the so-called continuation functions prevent possible failures and imperfections due to a power failure. Thanks to a touch screen, the individual parameters can be set directly on the device and the processes can be controlled and monitored.

The assembly of the Alfawise U20 Plus is relatively quick and easy, as only the frame and the substructure have to be screwed together. With some other 3D printers like the Anet E10 or the Creality3D Ender 3 in the past the pre-assembled parts were either mounted the wrong way round or screwed together completely crooked, which immediately makes the Alfawise U20 Plus 3D printer look better. When screwing together you will notice that no hammer screws are included because holes have already been drilled into the aluminium profiles. They are positioned quite precisely, but it makes the later conversion more difficult – if you are interested in a conversion at all.

On the other hand, you can also find pre-drilled holes, which are even more annoying, as the T-piece cannot be adjusted in height with the Z-end stop here, at least in our case. But you can adjust the perfect heating bed height by levelling with the help of heating bed screws. However, this does not always work, because the adjustment of the end stop is necessary. In addition, on the Y-axis you can only tighten the toothed belt on the heating bed, which is difficult to reach, and the pulley is unfortunately firmly screwed to the frame. On the other hand, the timing belt can be quickly loosened or tensioned on the X-axis. The screws are also fixed here, but the holder can be moved.

The heating bed deserves a point of criticism because it has no thermal insulation, which means that heating takes more time, the maximum temperature is too low and the temperature cannot be stable. In addition, there is no strain relief for the heating bed cable. It is soldered directly onto the heating bed. Therefore a solution should be found here, because the heating bed is constantly in motion and draws up to 200W.

The soldering point deserves a big plus because it is insulated with Kapton tape. What you may also not like are the small knurled nuts for leveling, because they are fiddly and too small. Also unattractive are the hard plastic hoses for the cables, which crack unpleasantly when printed quickly. Here net hoses would definitely have been the better choice. The steppers all come from the manufacturer Tronxy, which leads to the assumption that Tronxy is perhaps the manufacturer of the Alfawise U20 Plus. But we don’t know that and it doesn’t hurt the steppers either, because they are good from Tronxy.

In terms of electronics, the Alfawise U20 Plus differs significantly from the competition. The tested 3D printer runs on 24 volts and not on 12 volts. The stepper drivers are firmly soldered to the motherboard, whereby a 32-bit strong processor performs its services. The board is very cleanly wired. Many noname components were also used, whereby the mainboard comes from Longer3D and the display bears the designation T0280A. Cable lugs were used on the cables and power supply. In addition a MOSFET and a stepper are installed on the board. The power supply provides 15A at a voltage of 24V, which in theory allows the heating bed and hot end to heat up faster. All processes and parameters can be controlled via the full color touch screen.

The print results of the Alfawise U20 Plus are in the solid midfield, but from 50 mm/s the print quality gets a bit worse despite different filaments, various slicer optimizations and hardware controls. The warm-up phase is relatively okay compared to other 3D printers in this price range, so that the U20 Plus reached an adequate temperature within 2:30 minutes due to the 24V. In addition, the Buildtak-like surface does a good job, as the prints adhere very well, the underside is smooth and the printed objects can be easily removed afterwards. The print volume of the Alfawise U20 Plus is negative at between 74 and 77 dB. But the filament sensor works flawlessly, although the sensor construction isn’t really well thought out. Here the remains have to be fumbled out of the hole somehow. In addition, the filament holder is not particularly suitable – it falls apart several times, has no weight of its own and is made of flaky plastic. Well, the 3D-printer doesn’t cost $500 and the print result is important. Depending on layer height and quality requirements, you can achieve satisfied print results with a print speed of 50-70 mm/s. The printing speed is 50-70 mm/sec.

The Alfawise U20 Plus is a solid 3D printer for beginners and for professionals as a second device, who want to use the large construction volume of 40 x 40 x 50 cm without spending a lot of money and who do not expect any great features from the device either. The 3D printer is well processed and, with the right settings, delivers quite decent print results, but with small weaknesses that won’t bother private users as much. Unfortunately, the Alfawise U20 Plus doesn’t offer an update option due to the unknown firmware and the mainboard. Surely Alfawise and Gearbest will provide more information here.

The difference between Alfawise U20 and U20 Plus：

Alfawise U20 Plus - Reviews