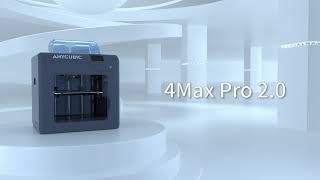 I usually test the open 3D printers here, which has two drawbacks from a purely physical standpoint. The heat of the heating bed escapes, especially if no thermal insulation is used on the bottom side, quickly (= cost driver for power consumption) and the volume of the steppers can be heard uninsulated. So if you want to print with ABS, ASA, etc., you should have your own cabinet, tent, etc.

Nevertheless I would like to pull a tooth for you right away: While in my tests the 260/100 degrees could be reached, the printing volume was already quite high. Not unpleasantly high, but for 2020 simply too loud. The reason? No well built stepper drivers (in fact the popular TMC2208 stepper motor drivers are on the starting line) and the cheap plastic case works, almost like a guitar, as a sound or resonance body.

Another special feature of the cube would be the architecture: Mostly the Prusa i3 type is used, but here the core type. This means that the printing bed is raised or usually lowered and the print head remains at the same height. This has 1-2 advantages, but also some disadvantages. But let’s start at the beginning.

Certainly the most important part in this report and I can abbreviate it with “well”. Now not really bad, but not great either. The first time I turned it on and homing (i.e. driving to the 0,0,0 coordinates) I was surprised directly negative by the loud Z-axis (after all 62dB!). There is no auto-level sensor (I don’t think it’s “bad”, but I somehow expect it in a “Pro 2.0” version) and so I had to level manually.

At least the firmware allows you to let the nozzles move automatically to the four corners. Since the heating bed has its zero point at the top, it is a bit tricky to operate especially the rear level wheels. No matter. Gift. The touchscreen reacts smoothly and accurately, offers the usual menu items in English. Heating up is fast with the 350W Meanwell power supply.

To alleviate some of my frustration, here’s something positive: the Auto Turn Off feature works well and turns off the 3D printer when 3D printing is finalized. (But not if, for example, the filament is empty and the 3D printer is left standing for hours. And yes, the LED lighting can be turned on/off in the user interface, but not during printing. Yaaay!)

I could go into the feeder, the Ultrabase, or the filter, but let’s face it: if you break it down, the 3D printer is just too expensive for the print quality. You can just take another 3D printer. That’s it. Still, if there’s a detail you’re particularly interested in, I can give you the info in the comments. Now, in my limited time, I’m going to try out a really great 3D printer!

Wow, you still read up to here? What do you think? Can you buy the ANYCUBIC 4Max Pro 2.0? Sure you can. Then it’s just not clever. The print quality is, measured by the price, simply too bad. The housing helps to reach and maintain high temperatures (other 3D printers can do it, too), but it’s much too loud.

The design makes it difficult to make or apply improvements after the fact. Unfortunately, no aluminum profiles were used for the frame. A real community has not yet formed and probably will not form. (Nevertheless you can find some really necessary mods at Thingiverse). The name ANYCUBIC 4Max Pro 2.0 just feels like a little joke, because many of the above mentioned problems – often they are just teething troubles – already existed in the previous versions.