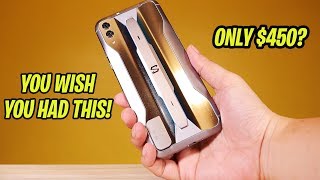 Xiaomi’s Gaming Smartphone Line-Up received a new addition in July this year with the Blackshark 2 Pro. A revised design with improved RGB lighting, a Snapdragon 855 Plus processor, fast UFS 3.0 memory, a faster touch screen and a revised cooling system should together offer an even better user experience when playing mobile games. So far the Blackshark 2 Pro was only available in China and not as a Global Version. Accordingly the device came without multilingual software, Google Play Store and in Germany important LTE frequencies on the market.

While the predecessor appeared quite soon as the Global version, the Blackshark 2 Pro was not the case so far and there were surely already first prospective customers, who gave up hope. Now, however, relief should spread, because Black Shark has finally announced the global version of the 2 Pro and the official EU launch of the gaming smartphone. On the official website you can already find an info page and can also sign up for updates to be notified when the smartphone is released.

In fact, it should be as early as 9 October. The Blackshark 2 Pro will go on sale for the first time as a global version. However, the Flash Sale will only provide a limited number of devices. At least you can get a bargain here, because whoever accesses the Flash Sale will get the corresponding game controller for the smartphone for free. Regularly this costs 90€. In addition, there should be a 50% discount on other accessories.

What the Black Shark 2 Pro itself in the Global version should cost, however, has not yet been announced. In China the smartphone came at a price of $450 with 12GB RAM and 128GB memory, as well as $520 with 12GB RAM and 256GB memory on the market. In Europe, however, there will probably only be the 256GB version – at least a 128GB version is not mentioned at all on the intro page.