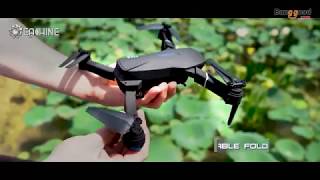 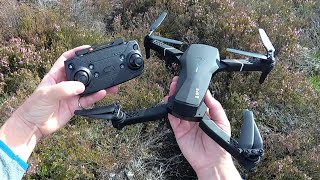 The Eachine E520S is an affordable camera drone in the look and feel of the popular DJI Mavic Pro. This is why the it has foldable booms for easy and comfortable transport. With the booms folded, the drone measures just 15 x 11 x 7.5 centimetres (L x W x H). The Eachine E520S weighs approximately 280 grams including the weight. According to current legislation (see here: drone regulation), a drone license plate or a drone badge is therefore required for the Eachine E520S GPS.

The Eachine E520S comes with a drone, remote control, battery, USB charging cable, screwdriver, propeller and propeller protection. The battery of the Eachine E520S GPS is a LiPo battery with a capacity of 1,200 mAh (7.4V). Four AAA batteries are required for the remote control, but they are not included in the scope of delivery and must therefore be purchased separately. When purchasing the it, there are bundle variants with one, two or a total of three batteries.

Haptically, the E520S makes a rather mixed impression. The matt black of the case in combination with the blue LED lights on the cantilevers gives a modern and cool impression. Practical: The Eachine E520S GPS has foldable Quick Release propellers with self-locking mechanism so that the propellers can be assembled and disassembled in seconds. On the front, the Eachine E520S GPS has LED lights that provide additional illumination of the subject and have no other function. This is where you would find the obstacle detection for more expensive, original brand products like the DJI Mavic Pro or DJI Mavic 2. Such an obstacle detection is not on board with the Eachine E520S GPS. The drone’s on/off switch is located on the case. The supplied remote control of the Eachine E520S GPS has numerous buttons and switches, but doesn’t look really high quality processed and stands out due to the rickety plastic joysticks negatively. The same is true for the packaging, which is also not of high quality and is largely made of cheap plastic.

It is available in five different versions. There is a 720p version, two 1080p versions and two 4K versions. Therefore, the models of the Eachine E520S GPS differ particularly in the maximum camera resolution. The FullHD and 4K versions are also available in 2.4G and 5G versions. The possible signal transmission ranges vary accordingly. While the 2.4G variants allow a range between 50 and 70 meters, the 5G variants have a range between 150 and 250 meters. In addition to the range, the 5G variants also benefit from improved signal transmission stability. Since the price differences between the different equipment variants are only marginal, you should always choose the “5G WiFi 4K HD” variant. This offers the best picture resolution and the highest range.

The supplied remote control of the E520S has the classic joysticks for controlling a drone as well as various buttons and switches for various special functions. A small LED display on the remote control informs about the operating status. Four buttons and switches for the return to home function, headless mode and automatic take-off and landing dominate in the middle. The controller is switched on and off with a slider in the middle. There is also an extra switch on the left for compass calibration and an extra switch on the right for emergency stop. The photo and video recording is done with the two shoulder buttons on the left side. On the right side there are corresponding shoulder buttons to activate the orbit mode and to adjust the airspeed. In total, the E520S offers up to three different speed levels. Below the remote control is the smartphone holder. The cheap workmanship of the remote control is also noticeable here. Although the holder fulfils its purpose, it is very rickety and unstable. The transmission distance of control commands in the 5G version is a maximum of 300 meters. The FPV range is about 200 to 250 meters, so that according to current legislation there is sufficient range buffer with the E520S from Eachine.

As already mentioned, the E520S is available in a total of five different variants. The Most Expensive and Best Equipped Eachine E520S GPS features a 4K camera and 5G WiFi signal transmission. The 4K videos are stored at a resolution of 2560 x 1440 pixels on a microSD card that is not supplied. Important to know: The camera cannot be adjusted or tilted while flying. In addition, the camera is neither mechanically nor electronically stabilized, so that the video material is recorded quite blurred and leaves a rather inferior impression compared to recordings with a DJI Mavic Pro.

Thanks to the GPS positioning system, it has all kinds of intelligent flight modes and functions. With the help of GPS position data, the entry-level drone can hold its position independently, making flying easy for beginners and novices alike. In addition, the Eachine E520S GPS is equipped with a Return To Home (RTH) function so that the drone can automatically return to its original take-off point at the touch of a button. In addition to RTH, the app also offers Waypoint functions, Point of Interest functions and a Smart Tracking Mode. The Smart Tracking mode, however, is not as reliable as the ActiveTrack function on DJI drones. Many objects are not recognized correctly or not reliably enough. ActiveTrack should therefore not be a reason to buy the Eachine E520S GPS.

It is a 4K camera drone with GPS. For about 100,- Euro you get a cheap 4K camera drone with GPS. Therefore, the Eachine E520S GPS is ideal as a beginner drone, since Return To Home or GPS positioning are on board and make flying easier. However, you shouldn’t expect too much from the cheap DJI Mavic Pro clone, because the quality of the workmanship leaves a lot to be desired and the aerial photos are rather mediocre.