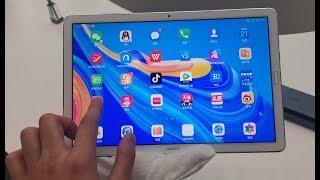 The Chinese electronics giant Huawei is still being shaken by various problems as a result of the American trade embargo, but this does not prevent the introduction of new hardware. In China, the Huawei MediaPad M6 8.4 and MediaPad M6 10.8 are two new Android tablets of the middle and upper class.

The Huawei MediaPad M6 family is particularly interesting because they are comparatively powerful models that are therefore well suited for multimedia and gaming applications. Huawei is one of the few suppliers that still holds onto the tablet market and serves it with a wide range of products.

The Huawei MediaPad M6 8.4 and M6 10.8 each offer the same core specifications and differ primarily in the size and capacity of the battery. Both models have LCDs with a remarkable resolution of 2560×1600 pixels, so that they are kept in 16:10 format. Under the hood is the current high-end SoC from Huaweis chipmaker HiSilicon in the form of the Kirin 980, whose eight cores reach up to 2.6 GHz and are roughly comparable to the Snapdragon 855.

Huawei will basically use four gigabytes of RAM and 64 or 128 GB of internal flash memory, with the latter capacity variant only available on the more expensive models with 4G/LTE support. The memory can easily be expanded using the MicroSDXC memory card slot. The MediaPad M6 8.4 and MediaPad M6 10.8 each have a 13 megapixel camera on the back and an 8 megapixel front cam.

Other features include a 3.5 mm headphone jack, a USB-C port, dual-band WLAN according to the ac standard, Bluetooth 5.0 and, of course, optional LTE support. Huawei has not yet given any details on the exact capacity of the batteries, but talks about up to 11 hours of video playback on the 8.4-inch model, while the 10.8-inch model is expected to last up to 12.5 hours. As operating system the EMUI 9.1 with Android 9.0 “Pie” runs of course. Sales of the new MediaPad M6 series will start in China in July with entry-level prices starting at around $480.