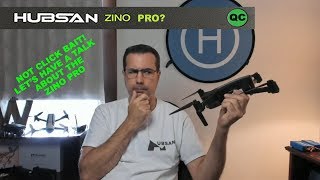 With the HUBSAN Zino series, the Chinese manufacturer Hubsan has a cheap and yet promising hobby drone in its program. The HUBSAN Zino Pro is equipped with a 4K camera, 3-axis gimbal, GPS and intelligent flight modes. The Zino series is the ideal alternative to the DJI Mavic series of the brand manufacturer DJI with foldable arms. We took a closer look at the Hubsan Zino drone and explained the advantages and disadvantages of the 4K camera drone.

The Hubsan Zino Pro is delivered in a plain, radiant white cardboard box. All components in the carton are packed safely, clearly and tidily with appropriate cardboard inserts. The Hubsan Zino comes with drone, remote control (HT016 remote control), rechargeable battery, three different USB cables with Lightning, USB-C and microUSB connection, 4x spare propeller, charging cable and power supply, screwdriver and an English user manual. It is worth mentioning that the supplied USB cables are only about 10 centimeters long and therefore too short to connect a tablet to the remote control. Nevertheless, most smartphone device types are covered by the Hubsan Zino Pro, which ensures good compatibility with most mobile devices.

Accordingly Hubsan offers the smartphone app called “X-Hubsan” both for iOS devices in the Apple App Store and for Android devices in the Google Play Store. The supplied remote control has an integrated smartphone holder for smartphone control and FPV functions. This is simply pulled out of the remote control and offers the possibility to clamp a smartphone with a size of up to 6.3 inches in the holder. Most tablets can therefore not be used. However, the cradle looks a bit unstable and therefore doesn’t give a really high quality impression. The attached rubber linings, which are supposed to prevent scratches and damage to the smartphone housing, are praiseworthy. On the right side of the remote control you will find the microUSB port as well as the cable guide for shooting the smartphone.

The non-removable and less precise joysticks and joysticks are made of plastic and offer less optimal feedback. Despite the less high-quality materials, the remote control appears robust and largely functional. A small drawback is the position of the smartphone used, as part of the screen is covered by the palms of the hands. In terms of ergonomics, too, the remote control of the Hubsan Zino Pro RC Drone could therefore be improved. Ultimately, the Hubsan Zino Pro drone can be classified as a fun and toy drone due to its poor workmanship, even if the Quadrocopter itself has an appropriate workmanship quality.

When the outriggers of the Hubsan Zino Pro are unfolded, the drone has a diagonal size of 350 millimetres. The folding mechanism of the Hubsan Zino Pro is in contrast to the remote control and the rickety switches and regulators quite high-quality and stable. The same also applies to the battery compartment, so that the battery can be safely inserted or locked in place with a clear click.

The on/off switch of the Hubsan Zino Pro RC drone is not located on the battery, but on the drone housing itself. The Hubsan Zino 4K can be switched on and off by pressing a button for about five seconds. A blue LED indicates whether the Zino 4K Hubsan is switched on or off. The housing of the Hubsan Zino Pro is white for the most part, which creates a high-quality and modern impression visually. The propellers and motors and/or engine covers are held in dark black. Haptically the used plastic obtains however a rather less high-quality impression – here products of mark manufacturers feel somewhat more high-quality like DJI. The Hubsan Zino Pro is not equipped with a vision positioning system for particularly stable flight conditions or even obstacle detection, which is why it is usually reserved for more expensive DJI drones. On the left side of the Hubsan Zino Pro there is a microUSB connector for firmware updates and a microSD card slot. However, a microSD card is not included in the scope of delivery and must therefore be purchased separately. According to the manufacturer, the Hubsan Zino 4K supports up to 64 gigabyte memory card capacity.

With dimensions of 30.40 x 25.20 x 9.00 cm (L x W x H) and a weight of about 700 grams (without propeller protection), the Hubsan Zino is comparatively compact and light. Since the weight exceeds the current 250 gram limit, the Hubsan Zino requires a drone license plate. The Hubsan Zino Pro drone uses a 3,000 mAh LiPo 3S battery (11.4V) for energy supply. The loading time with the supplied charger and/or power pack is with approximately 240 minutes and/or four hours. In itself, the Hubsan Zino 4K offers comparatively stable flight characteristics thanks to its integrated GPS. Since the Hubsan Zino does without a ground camera or ultrasonic sensors, drones with Vision Positioning System offer even more stable flight conditions. In terms of flight range, the Zino Pro is sufficient – the FPV image is still sufficiently stable and fluid at distances of 100 meters.

Before using the Zino Pro for the first time, the flight battery must be charged. All you have to do is plug the included power supply into a suitable mains socket and connect it to the supplied balancer charger and drone battery. The charged battery is then inserted into the Hubsan Zino Pro drone from behind. According to the manufacturer, the Hubsan Zino’s flight time is approximately 23 minutes. In practice we could determine a flight time of approximately 19 to 20 minutes. On the remote control of the Hubsan Zino-Quadrocopters one finds not only the two joysticks, but also various buttons and switches for different functions. On the top side of the remote control there are for example buttons for automatic, GPS-supported landing and take-off, an on/off button as well as a slider for switching between an expert or sports mode and normal mode. In normal mode, the maximum airspeed is approximately 60 kilometres per hour. If you switch to sport mode with the remote control, there is not much difference in speed. On the upper side of the remote control, there are two rather rickety shoulder buttons for photo and video recording in addition to the foldable antennas, and on the left side there is a rotary wheel for the inclination of the 3-axis gimbal. Freely assignable function buttons are not built in.

The Hubsan Zino Pro drone has a 4K camera and a 3-axis gimbal. The gimbal serves its purpose, but looks a bit cheap and very fragile. Without the protective cap provided, it is therefore better not to transport the Hubsan Zino drone in order to avoid damage to the gimbal. The camera of it records 4K images at a maximum of 30 frames per second. Higher frame rates of up to 60 fps are only available with a 1080P resolution. The data rate amounts to approximately 40 Mbit/s.

The Hubsan Zino Pro has – despite its low price – all kinds of intelligent flight modes. With a panorama mode, for example, it can automatically record panorama shots at the touch of a button. There is also a Line Fly mode, similar to the TapFly mode of DJI drones. The Line Fly mode allows you to manoeuvre the drone to any point by selecting it in the FPV display. This mode is ideal for precise and elegant aerial photography. In addition to the Panorama or Line Fly mode, it is also equipped with an Image Tracking function and a Follow Me mode. Image Tracking can be used to select a moving object to be followed by the drone. Finally, the way-point mode is worth mentioning, which can be used to set several waypoints on the map and then fly off the drone independently. In surround mode, the Zini 4K Hubsan even has a Point of Interest function, where the airspeed and radius can be set individually.

The already mentioned “X-Hubsan” app is used to select the flight modes or the FPV view. The app is comparatively tidy and clearly arranged and suitable for both iOS smartphones and Android smartphones. In the test the app runs remarkably stable. In addition to settings for maximum speed, the app also offers settings for altitude in Return To Home mode. Various telemetry data and flight parameters are displayed in the live image of the app – in the lower area, for example, the app provides real-time information about the flight speed, flight altitude, flight distance and the angle of inclination of the gimbal. With a tap on the flight modes menu you can select the normal mode, the waypoint mode, the surround mode, the follow me mode or a capture video mode (panorama recording). In the upper part of the app, information about the status of the aircraft, for example signal connection, number of satellites or battery status, is clearly displayed. On the right side of the screen you can switch between photo and video mode. In addition, the app offers various setting options regarding video resolution, frame rate, white balance, ISO, exposure, saturation, contrast or sharpness.

The Hubsan Zino Pro is an affordable and therefore affordable camera drone that is ideal for beginners and beginners. However, the user also has to cut back on processing quality and sensor technology. Nevertheless, it convinces with its 3-axis gimbal, 4K camera, foldable design, app control and intelligent flight modes such as ActiveTrack (Visual Tracking) or Waypoints. It earns minus points due to the less high-quality remote control, the rudimentary sensor technology and the extremely long charging time of the flight battery. In this respect, Zino Pro offers a reasonable entry into the world of 4K companion drones. However, if you are looking for a higher quality and better equipped aircraft, you will have to resort to more expensive alternatives – such as the Xiaomi FIMI X8 SE or the DJI Mavic Pro.