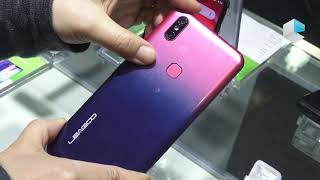 With the M12 Lite, the Chinese manufacturer Leagoo has announced three smartphones for the small wallet. The other two M12 series have been introduced yesterday, they are Leagoo M12 and M12 Plus. To ensure that this smartphone still works smoothly, the company is using the Google operating system Android 9.0 for the first time, which has been specially designed for beginners.

Technically, the announced Leagoo M12 Lite corresponds to one of the cheaper entry-level devices. The phone is said to have a MediaTek MT6580 processor with four cores and a clock frequency of up to 1.3 GHz. The system is supported by 1 GB RAM, while the internal memory is 16 GB. Even the main and front cameras of the smartphone are not very special with 8 and 5 megapixels, while the built-in battery with 3,000 mAh is even well below the average.

Although the hardware isn’t exactly outstanding, the Leagoo M12 Lite should still work smoothly. The Google operating system Android Go, which is based on Android 8 Oreo and was explicitly designed for devices with 512 MB to 1 GB RAM and 8 GB data capacity, should ensure this. It’s also interesting that the phone was manufactured in the modern 18:9 format despite a comparatively small display diagonal of 5 inches. This meant that the case could be kept compact, which makes the Leagoo M12 Lite particularly handy.

As far as the price is concerned, this is still completely unknown at the present time. In view of the weaker equipment, however, it is likely to be below the $80 mark. The official release date is also unknown.