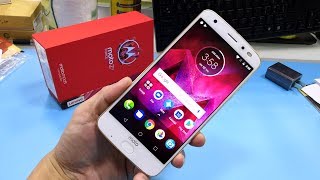 Just one month after the release of the mid-range smartphone Moto Z2 Play, Motorola is already releasing the next model of the young Z2 series. The Moto Z2 Force should be able to compete with well-known flagships such as the Huawei P10, and the device has more than just one highlight in its bag as support: an unbreakable display and the attachable Moto Mods are the most interesting.

Motorola was not lumpen in the workmanship of the display and equips the X Force 2 with its Shatter-Shield technology. This is the company’s guarantee that both the display and the embedded lens will be resistant to larger cracks or breakage for four years. However, scratches and other minor damage are not included in this warranty. Otherwise, the Quad HD Super-POLED display measures 5.5 inches and has a resolution of 1,440 x 2,560 pixels. Matching the display, the device is also manufactured from a very robust unibody case with a 7000 aluminum alloy. A water-repellent nano coating covers the Moto Z2 Force.

As a further ace up the sleeve Motorola also has its own Moto-Mods available. This refers to expansion modules that are attached to the back of the smartphone and thus supplement it with more batteries or additional loudspeakers, for example. Together with the Z2 Force, Motorola also introduced the new 360 Camera Moto Mod, which, as the name suggests, is a clip-on 360-degree camera. This allows you to record 4K videos with 3D audio and take photos with a 150-degree wide angle.

The Z2 Force is powered by Qualcomm’s latest Snapdragon 835 2.35 GHz processor and Adreno 540 GPU. In addition, there is a 6 GB RAM and an internal device memory of 64 GB, which can be expanded to up to 2 TB via a microSD card. Android 7.1.1 Nougat is pre-installed ex works. An update to Android 8 Oreo will be available shortly. The 2,730 mAh battery provides the necessary stamina, which is particularly quickly recharged thanks to “15W Turbo Power”. A fingerprint sensor in the home button, the WLAN-ac standard and LTE with up to 1 GB/s round off the technical features of the moto smartphone.

Motorola now also thought it would be better to use a dual camera on the back of the device. Both lenses shoot with 12 megapixels each, with one camera responsible for colorful shots and the other for black-and-white photos. Depth-of-field effects are also provided thanks to selective focus and selective black-and-white. With these functions, the subject in focus can be emphasized by blurring or gray scale coloration in the foreground or background. In addition, the professional mode allows the image to be edited in real time. At the front there is a 5-megapixel camera with a wide-angle lens.

The Moto Z2 Force is available at a price of $219.99. The colours Super Black and Fine Gold are available.