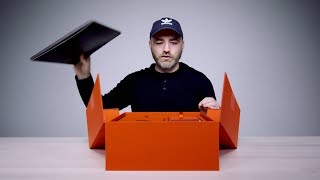 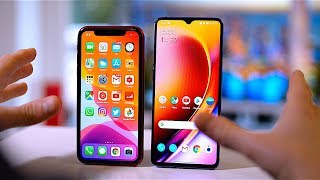 The Oneplus 7T has a slightly different design, a 90Hz display and now also a triple camera. Actually, Oneplus delivers everything you knew from the Oneplus 7 Pro. The price in Europe is still unknown, but in India you pay a surcharge of 65€ (almost 15% more expensive than the predecessor). With us this would mean a price of 640€.

The colours silver-black and light blue-dark blue are now available, the notch is slightly smaller and the most striking design element is now the circular camera module on the back. The FHD AMOLED display has grown to 6.55 inches and is 161 millimetres long. The width and thickness of the Oneplus 7T remain almost the same as its predecessor at 74.44 x 8.13 millimeters. The weight is now 190 grams.

A highlight of the T-version is clearly the 90Hz refresh rate of the display. A rarity in this price range and in smartphones at all. Due to the higher repetition frequency of images, games and navigation in the system simply appear more fluid. But also the battery consumption will increase, but not as much as with the 2K display of the Oneplus 7 Pro.

The Snapdragon 855 Plus is also a notable upgrade, although the speed is not noticeably increased. All versions of the Mi 9T now have at least 8GB RAM and Oneplus also deserves praise for the fact that only UFS 3.0 memory has been used since the OP7. This memory is almost twice as fast as UFS 2.1 memory.

Android 10 and Oxygen OS are self-explanatory and are already making their way into predecessor models. Here, too, Oneplus has proven to be reliable for years when it comes to long and meaningful software updates. But here the manufacturer has it with clearly fewer Smartphones also much simpler, than many large competitors.

We already know the main camera of the 7T from its predecessor and here everything stays the same. Nevertheless, the OIS and EIS are worth mentioning, which you don’t find so often on smartphones. The Oneplus 7 had a poor 5 megapixel depth sensor. The Oneplus 7T now completes the triple camera setup with a 12 megapixel telephoto camera and a 16 megapixel ultra wide angle camera. Definitely a good idea and much more added value in practice than with the Oneplus 7. Nothing changes with the front camera.

This makes Oneplus smartphones suitable for frequent travelers without restrictions. WIFI ac, Bluetooth 5.0, Dual-GPS and NFC are of course also included. The battery grows by 100 mAh to 3800 mAh, which is hardly enough to satisfy the increased energy requirements of the 90Hz display. Since the battery life of the Oneplus 7 was a very solid 12 hours, the Oneplus 7T will still be able to run for 10 hours.

The Oneplus 7 remained somewhat on track in Europe. With the high price of 559€ definitely understandable, since the right highlights on the smartphone were somehow missing. The triple camera and the 90Hz display could change that. But Oneplus has to be careful, even if many magazines still want to present Oneplus as a cheap high-end alternative, you can’t say that about the prices. For 400€ the Oneplus 7 is a great smartphone, but for 559€ it looks a bit different. You get dangerously close to areas where you can buy a Samsung Galaxy S10+ or Huawei P30 Pro. If Oneplus continues the pricing policy for Europe as before, the Oneplus 7T will cost 640€ and the Oneplus 7T Pro will cost 800€. I am also very curious how Oneplus will top the Oneplus 7T again with a Pro version. On October 10th we will know more.

TWS headset is hot, many manufacturers have entered this market. As a well-known digital accessories brand, UGREEN also made a deep layout in the...