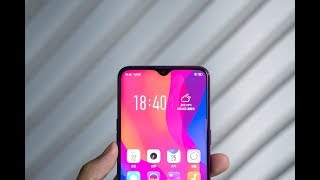 Even if one of the manufacturers Oppo has so far said little, you should, if you have tracked the current top models something, the latest from Oppo Find X heard. Now the manufacturer manages to be, at least to some extent, innovative again. The Oppo R17 features a waterdrop notch and the pro version even gets a triple camera.

The premise of Find X, namely to be as borderless as possible, can also be found in the design of the Oppo R17. The main focus here is on the display, which is an AMOLED panel with a 6.4-inch diagonal screen. This does not only dissolve in Full HD, no, it also occupies a total of 91.5% of the front – wow! At least that’s the official value, if that’s true? This  screen-to-body ratio is quite remarkable for a non-flagship.

This realizes the Oppo R17 but only in which one also relies on a Notch. This is very small and mainly houses the front camera. Due to the shape of a drop of water Oppo speaks here of a Waterdrop Notch. This should not be the only special feature of the display. Because the fingerprint sensor of the Oppo R17 and R17 Pro is in the display, as we know it for example from the Xiaomi Mi 8 Explorer Edition.

If you look at the back, a strong influence of Huawei is unmistakable. After the P20 & P20 Pro, for example, the Honor 10 has also opted for this Twilight design, which combines various metallic colors. Above all, here is a mixture of green, purple and blue dominant and gives the R17 a very eye-catching look. Also, at the bottom of a very thin screen edge is visible. Overall, that reminds us pretty much of the Vivo NEX, but with Notch instead of Pop Up camera and the more eye-catching Twilight design.

Although the Oppo R17 may look like a flagship, the hardware speaks a more subtle language. The Oppo R17 uses the Snapdragon 670, which is a recent update to the already popular Snapdragon 660. We know the 660 from the Xiaomi Mi 6X and have already done a good job there. The update in the form of the 670 should therefore provide a very good performance and more than sufficient for gambling. In addition the manufacturer enough generous 8 GB of RAM and 128 GB of internal memory. The R17 Pro even counts on the Snapdragon 710, which we already know from the Xiaomi Mi 8 SE.

For fans of Augmented Reality especially the Pro variant, so the Oppo R17 Pro should be interesting. Here, the Chinese manufacturer uses a triple camera, three camera sensors, which are located on the back. However, the third sensor is not an extra telelinze for zoom photos like the Huawei P20 Pro, but a ToF sensor. That stands for time of flight.

But for photographers, too, the Pro version offers a significant advantage. The R17 Pro also uses a mechanical shutter that covers at least two f-stops (ƒ / 1.5 and ƒ / 2.4). We already know that from the Samsung Galaxy S9. The sensors are a 16 megapixel and a 5 megapixel sensor. On the front Oppo even donated a 25.0MP sensor, but that must be known as nothing.

The battery of the Oppo R17 with 3500 mAh capacity is relatively average. You can also charge it quickly with the USB Type-C slot. On the internal memory is of course Android 8.1, but not expected us in the known form. Oppo adjusts the operating system strongly and offers with ColorOS 5.2 a strongly adapted surface. Which connection possibilities exist, is not yet completely known. LTE Band 20 is probably not on board, with GPS, Bluetooth 5.0 and ac-WLAN, but we already expect.

The Oppo R17 and just the Oppo R17 Pro look really good in my eyes. The processor choice is right, I like the design very well – you can get used to such a small Notch quickly and the fingerprint sensor in the display is of course a small highlight. How good the camera is, can not be estimated quite, but here we hope for a real added value of the ToF sensor. On the other hand, the problem is probably the Asian marketing, which only includes English software and the missing volume 20.

The Oppo R17 will be presented in Shanghai on the 23rd of August. With a starting price of over $500, the smartphone seems quite expensive, despite the generous features.