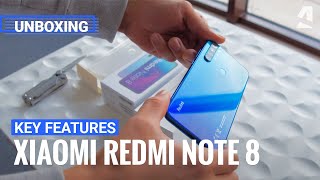 For a long time, the company’s Xiaomi products were only available through detours in Germany. But that has changed this year. Step by step, Xiaomi is expanding its selection of devices sold directly in Europe. Xiaomi has planned the market launch in Germany for a long time and in detail. So it is not surprising that the Chinese held their current product launch in the middle of Europe – more precisely in Madrid. Priceboon was also on site at the presentation and was able to get a first impression of the newcomers to Xiaomi.

The Redmi Note 8T stands out especially in price. The smartphone costs 199 Euro and offers a lot of equipment: Buyers get a 6.3 inch device with LC display including Full-HD+ (2340 x 1080 pixels) in Fullview format, Snapdragon 665 as well as 64 GB expandable memory and 4 GB RAM. Remarkable for this price is the camera equipment. Xiaomi has given the Redmi Note 8T a quad camera with 48MP, 8MP (wide-angle) and two 2-megapixel sensors (macro and depth gauge). A 13-megapixel front camera is added to the front of the station wagon. The battery’s capacity of 4000 mAh does not need to be hidden. The battery can be charged quickly with 18 watts.

With a starting price of 199 euros, the Xiaomi Redmi Note 8T is one of the cheaper smartphones on the market. It will be available from 15 November via the major German electronics chains such as Amazon, Cyberport and Media Markt / Saturn. Only the version with 4 GB RAM and 64 GB memory (expandable up to 256 GB) will be available, although users can choose between the colours Moonshadow Grey, Starscape Blue and Moonlight White.

As far as the system is concerned, Xiaomi equips all new smartphones with its own user interface. MIUI 11, as the manufacturer calls it, looks a bit more mature and tidy compared to earlier versions. The app icons have a new design and the font size can be adjusted in smaller steps. A separate App Drawer will be released later, but is still missing. Installed apps are thus always stored on the Home screen – similar to Apple.

Xiaomi has also adapted Dark Mode and extended the Always-on display. Always-on allows users to display information such as the time, received messages and appointments, etc. even when the display is switched off with white text on a black background. As the display is activated less frequently, the device saves power. The display can now be more personalized so that users can read more information even when their mobile phone is locked. The adjustments can be made via the settings in the menu. Different Always-on designs with different colors are available. In addition to the Always-on display on the switched-off screen, the “Breathing Light” function is to work. It uses the curved part of the display to indicate the arrival of new messages by means of an optical effect.

Summary: The Redmi Note 8T scores with an excellent price-performance ratio. With this device Xiaomi can become quite dangerous on the cheap sector of competitors like the currently suffering Huawei. As a Chinese manufacturer, however, Xiaomi is also potentially at risk of being punished by the US government. Interested parties should also keep the data protection issue in mind. Although the company officially guarantees the security of the data, healthy scepticism on the part of Chinese manufacturers is entirely appropriate.