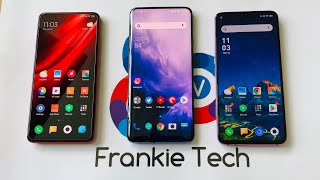 Earlier, Xiaomi announced that the official launch of the Mi 9T Pro will take place on June 12. Today the new smartphone appeared on the popular Geekbench platform. Technical characteristics of the device fully confirm that it is an updated version of the Redmi K20 Pro. Recall that the smartphone is equipped with a central processor Snapdragon 855. The flagship Qualcomm platform provides maximum performance.

The test results of the Xiaomi Mi 9T Pro show that the device is estimated at 10,363 points in a comprehensive performance check. The smartphone received 3453 points for single-core testing. The new model of the flagship line runs under the Android 9 Pie operating system. However, in the near future an update for the transition to Android Q should be released.

Portal Geekbench does not disclose the exact name of the processor, but it is well known that this smartphone is equipped with a chipset Snapdragon 855. Redmi K20 and Redmi K20 Pro will be sold only in two countries – India and China. For all other markets analogues in the form of Xiaomi Mi 9T and Xiaomi Mi 9T Pro are provided. The latest teasers confirm that the new smartphones will be launched on June 12, but the place of the presentation is kept secret.

A few words about technical characteristics. The smartphone is equipped with a 6.39-inch screen with Full HD support. Using the front camera sliding module allows you to achieve maximum screen space. There are no holes or notches on the display. Front camera resolution is 20 MP. On the back panel of the case there is a triple module of the main camera – 48 MP + 13 MP + 8 MP. High quality of shooting is guaranteed.

Prices published. Of course, information from unauthorized sellers cannot be considered official, but the available cost information can be used as a guide. Prices vary depending on the chosen configuration. For example, for Xiaomi Mi 9T with 6 GB RAM and 64 GB of flash memory in the Philippines you will have to pay $377. A similar version of Redmi K20 in China costs 289$. It testifies that for rebranding it is necessary to overpay about 100$.

The high level of performance of Xiaomi Mi 9T is provided by the eight-core Snapdragon 730 CPU. Battery capacity is 4000 mAh. The smartphone is equipped with a large 6.39-inch AMOLED screen. The resolution is 1080×2340 pixels. The device will be available in three colors. Xiaomi Mi 9T Pro practically does not differ anything, except for the central processor. This model is equipped with Snapdragon 855.

The new line of Xiaomi – smartphones with a retractable module of the front camera. The frontal resolution is 20 MP. The official release will take place very soon. That’s why it won’t take long to wait. Soon there will be the final price of smartphones.