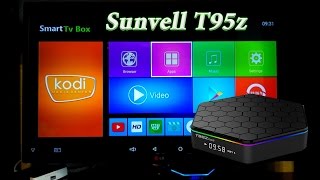 At the moment, the realities are such that when you select a TV set-top box for your TV or projector, faced with the fact that almost all devices have the same, same-type design. This is almost the same plastic or metal devices, which differ mainly in inscriptions, sizes and of course the characteristics. This TV Box Sunvell T95Z Plus does not differ much from its counterparts in its “filling” ( Beelink GТ1, Beelink R68 II, Alfawise S92, Yundoo У2 ), but it has very noticeable differences in appearance. Smart tv console Sunvell T95Z Plus has an unusual design in the style of “honeycomb”, as well as a multi-colored LED-backlight with several modes of operation and a display with a clock.

Sunvell T95Z Plus TV Box, assembled on the basis of 8-nuclear chip Amlogic S912 Cortex A53, which has a frequency of 2 GHz, for the graphics is responsible processor Mali-T820MP3, whose frequency reaches 750 MHz. Also, the T95Z Plus received 2 GB of RAM and 16 GB of internal memory, which can always be increased by using a micro SD card.

To summarize, it’s safe to say that the TV Box Sunvell T95Z Plus is a stylish TV set-top box with unique functions of a programmable remote and an additional screen with a clock. The pluses include the presence of Root rights “out of the box,” solid Wi-Fi and the ability to update the device through the air. As for the minuses, they can include a bug with the bottom curtain, but I hope that in the next update this problem will be fixed. In general, the prefix left a very pleasant impression.