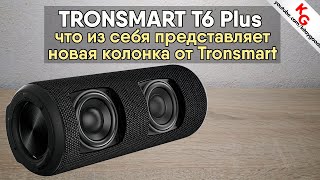 Freshly launched, the Tronsmart Element T6 Plus portable speaker is already available in Geekbuying. This model is an upgrade for the first T6 Element, currently one of the most powerful portable speakers in the Chinese manufacturer portfolio.

With a modern look, the box has a waterproof material that resists almost any weather so it can be used even at the pool or when it’s out. It integrates a 6600 mAh battery that charges via a USB Type-C port in 3-5 hours and should provide up to 15 hours of use at medium volume or up to 20 hours at volume up to 70%. Also, the battery can also be used as an external battery, with the ability to charge the phone or other devices.

It uses Bluetooth 5 technology and its range has increased, making it possible to connect the speakerphone to the phone from a distance of up to 20 meters (in the free field). The Tronsmart Element T6 Plus is equipped with a MicroSD card reader, but also with a USB memory stick, which means it can be used without the mobile phone. The sound is stereo, thanks to the two speakers with a maximum power of 40 watts.

Like the Element Blaze model and most of the Tronsmart portfolio speakers, the T6 Plus features the True Wireless Stereo (TWS) feature that allows simultaneous connection of 2 speakers to a phone or tablet. At the touch of a button, it can turn on the talk with the virtual assistant – most likely the assistant available on the mobile phone (Google or Siri). From my point of view, the T6 Plus can be considered the best and most affordable alternative to the JBL Xtreme, which is the most likely competitor.

Because it is a new model, at this time Geekbuying wants to promote it and offers for sale this package box with various accessories. The price is lower if you buy it with extra accessories unless you buy the box only. As usual, for delivery by courier, without additional charges, choose the EU Priority Line, which in the case of the girl costs you nothing.