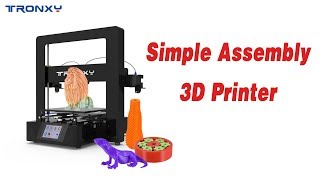 The Tronxy X6-2E hit the market in the fall of 2018. It is a kit for a cheap Core-XY printer with very large space of 220 x 220 x 210mm. With the Tronxy X6-2E, the manufacturer Tronxy thus provides another kit for a 3D printer with the current standard for large installation space.

At the time of this review, the printer was for about $360 to get. Thus, he was the cheapest 3D printer with such a large space. Based on the components and materials used, the Tronxy is a good offer. The kit can be assembled with a little rework, similar to the Anet A8, a very good 3D printer. The frame construction and the standard components can be almost completely retained. Only a few acrylic parts should be replaced with printed parts or other replacement.

The print quality of the Tronxy X6-2E can sometimes be described as neat. The extruder components used are fine the frame construction provides sufficient stability thanks to the aluminum profiles used. The design of the X-axis on the Tronxy was particularly positive. This is really solid and provides a very good stability for the print bed.

The Tronxy X6-2E uses more or less the printer design of the first Makerbot series, which has proven to be convincing. The quality of some components leaves much to be desired and suggests replacing them with printed parts or spare parts. Among other things, the shots for the axes which are made in acrylic and the usual wear part, the belt. Tronxy’s test did not cause any problems with longer print jobs. Intial you do not have to worry about the contents of the kit. Nevertheless, despite the price pressure, one could have considered some components of higher quality.

The electronic components of the Tronxy is on par with other 3D printers under 300 euros. The Melzi board the Tronxy used here is adequate for the printer as it is. Other features can not be retrofitted easily. Negative is still to be noted that the wiring harnesses are a bit short. A clean cable management is a bit cumbersome. Useful is the fact that there is already a bootloader on the board and you can easily update the firmware via USB without a separate programmer. Likewise, the first update of the manufacturer has been available for several weeks.

The volume in operation is the Tronxy X6-2E as with most 3D printers not so great. The price is, however, easy to handle. All fans can be easily exchanged for higher quality fans from the PC segment. Otherwise there is no particular abnormality in the volume of the Tronxy X6-2E. Concentrated work next to the 3D printer is rather tedious.

The Tronxy X6-2E arrives at the proud new owner with some prepared assemblies. Ultimately, however, you have a few hours of work before the Tronxy is built up. Many enjoy this exciting job, others are more afraid of it. The Tronxy X6-2E promises a lot of construction work.

The attached assembly instructions, which are included on the SD card, are sufficient. Some illustrations are not exactly unique and you have to think about the structure. The manual is about Ikea-level. The structure is also possible without special experience, but errors are not excluded.

This printer is definitely an interesting printer for all who do not shy away from the crafting. If you have only a little idea about such tinkering, you can make the Tronxy X6-2E a fantastic 3D printer. Only a few parts of the frame construction need to be replaced potentially. This is a clear difference to an Anet A8, where gradually every part is due .. Already with the kit alone can be very good 3D printing projects realize. Anyone who already owns a printer like an Anet A8 and only wants a larger second 3D printer is on the safe side with the Tronxy X6-2E and will have a lot of fun with it.

3D printing is all the rage and it's fun. You can create practically anything. The prices of 3D printers are going down. You can...