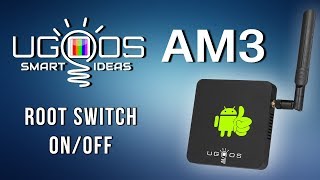 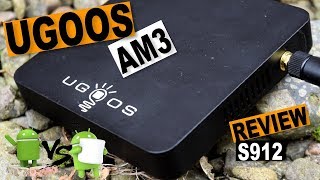 Today we will look at the updated version of the popular TV box Ugoos AM3. The company Ugoos specializes in the production of media players and smart TV boxes, known as the manufacturer of the world’s first TV set-top box in the dongle form factor on a dual-core processor. Since then, the company has not lost its leading position in the global market and is constantly improving its products.

Ugoos TV boxes are popular due to the constant improvement of software. Most TV boxes from other manufacturers port Ugoos firmware as one of the most functional.

The remote control is standard, without programmable buttons. There are two types of remotes for Ugoos AM3 – black with blue row of buttons and black with orange buttons. The type of the remote switch in the settings of the TV box. The power of the console is provided from two elements of type AAA. Users shouldn’t worry about the simplicity of the complete remote, since Ugoos AM3 works well with HDMI CEC and there is a possibility to use Ugoos’s proprietary Fireasy application for managing the TV box (supported only by Ugoos TV boxes).

As for me, I prefer to use an inexpensive, unpretentious and reliable Flymote AF 106 airborne mouse to control TV boxes.

The body of the updated version of Ugoos AM3 is made of matt black painted metal. The case of the old version was made of silumin. The case size of the new version is slightly smaller than 114x114x20 mm versus 117x117x26 mm in the old version. On the upper part of the body there is a logo of the company Ugoos. The first letter “O” in the logo is made in the style of a light bulb, inside the letter there is a rectangular light guide of the TV box operation indicator. During operation, the indicator lights up in blue, in standby mode – red. The intensity of the indicator is below average. Such a luminescence does not irritate the eyes at all, in the daytime it is almost not noticeable.

The cooling system is made original. There are enough ventilation holes in the casing to remove heated air. If you remove the screen on which the radiator is glued, we can see that the transfer of heat from the processor to the screen and further to the radiator is done through a thin strip of thermally conductive material. As already mentioned, the heat is partially removed and the metal case, which is made of metal with a thickness of 1.3 mm. Judging by the user reviews, the standard cooling system copes with the tasks. But those who wish to further reduce the temperature can install a larger radiator in the case, there is plenty of free space in the case. The temperature of the processor in various modes, we will see later in the review, when testing.

A little bit about the Ugoos launcher. In the launcher window, on the left side, there are menu sections. Installed applications can be placed in the appropriate section, depending on their purpose. In the settings of the launcher, you can change the structure of sections and the number of displayed application icons on the pages of sections, setting the background, setting the displayed temperature.

At the top of the launcher window there is a digital clock and displays the temperature, the free amount of internal memory and an icon for connecting to the Internet.

Ugoos Launcher is optimized for working with the standard remote. In the launcher there are upper and lower functional panels (bars) that automatically hide, for their appearance it is necessary to make a swipe with the mouse or press and hold the “menu” button on the remote control on the remote.

During testing of the TV box, Ugoos Launcher was periodically turned off with an error, so I turned on Launcher 3 by default.

I liked Ugoos AM3. This is one of the best TV boxes I have monitored. Among the TV boxes on the SoC Amlogic S912, the Ugoos AM3 stands out for firmware with a bunch of useful additional features. This tv-box will perfectly cope with the function of a home entertainment media center.

At the moment, the firmware Ugoos AM3 on Android 7.1.2 has not yet been finalized to the ideal functionality. Developers are constantly doing hard work to improve the software. Those who want stable work can easily flash on stable versions of software 1.1.1-.1.1.6 (Android 6).

Damp firmware 2.xx (Android 7.1.2) will use it and wait for the software update;
The use of RAM in firmware 2.xx (Android 7.1.2) is great;
It is not clear why the manufacturer replaced in the new version the chip of the built-in memory from Samsung with Longsys FORESEE;
On this perhaps and finish. I would be glad if my review is useful to someone.

All good! Thanks for attention!