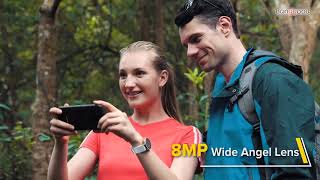 After Ulefone recently announced the Armor 9E, the new outdoor smartphone has now been officially unveiled. Now the most important technical data are available, which we will take a closer look at in the following.

Like its predecessors, the Armor 9E aims for robustness and therefore naturally offers a corresponding design. Instead of thin and slim, there is thick and bulky. The basic structure is reinforced by solid metal struts and the protruding corners have been given a softer material to absorb the forces generated by falls. Of course, the Smartphone is also completely waterproof again and there is an attachment for a carrying strap.

The camera system of the Ulefone Armor 9E has been significantly revised, with a quad camera on the back, which uses the 64MP Samsung GW1 with f/1.89 aperture for the main lens. In addition there is a 2MP camera for depth detection in Bokeh / Portrait mode. The other two sensors belong to the thermal imaging camera and are supplied by FLIR. More precisely, it is a FLIR lepton system with MSX (Multi-Spectral Dynamic Imaging) technology. The latter provides more detailed images with the thermal imaging camera. In addition to the pure optical imaging of temperature conditions, the Ulefone Armor 9E can also be used to measure temperatures in a targeted manner and output as values.

For selfies, the Ulefone Armor 9E is equipped with an 8MP camera in a drop notch. An external endoscope camera is also available as an option. This is magnetically connected to a port on the side of the smartphone and can then provide images from inside a pipe, for example. Integrated in the endoscope is a lamp, which illuminates the surrounding of the camera. The endoscope has a length of 2 meters and delivers images with a resolution of one megapixel. If you can afford the endoscope, you will also receive a protective cover to transport the device easily and safely.

The rest of the hardware has not changed too much compared to its predecessor. The Ulefone Armor 9E is equipped with a 6.3″ Full HD+ IPS display – including scratch-resistant glass and a fat-repellent coating. As processor the Mediatek Helio P90 is used again, which offers more than enough power for most middle class prospective customers. In addition, 8GB LPDDR4X RAM and 128GB UFS 2.1 memory are on the starting line. The latter can be expanded by Micro SD card, but for this one of the two Nano SIM slots goes on. Unlocking is done by a capacitive fingerprint sensor on the side of the Ulefone Armor 9E or alternatively by Face Unlock or classic PIN code / pattern / password. A 6.600mAh battery with 18W Fast-Charging is responsible for the power supply. Furthermore, the Ulefone Armor 9E offers NFC with Google Pay support, global network support, AC-WLAN, Bluetooth 5.0 and a notification LED (RGB).

TWS headset is hot, many manufacturers have entered this market. As a well-known digital accessories brand, UGREEN also made a deep layout in the...