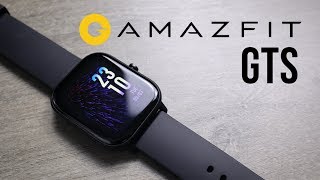 Apple or Huami? After the Xiaomi Amazfit GTR , the next Smartwatch of the manufacturer is already coming. The Amazfit GTS Smartwatch looks suspicious after the Apple-Watch. Did they only “Steal” or bring in their own ideas?

Why one originally assumed a new Apple Watch is obvious at first glance. The new Huami Amazfit Smartwatch looks almost 1:1 like the current Apple Watch Series 4. It is a watch with a rounded, “Square” screen. Apple has perfected this look a bit with the current generation, as the display is larger and the corners are not quite as rounded. However, the function key of the GTS is not located at the top right of the side, but centrally on the side.

The GTS relies on a 1.65 inch AMOLED display with a resolution of 348 x 442 pixels. This not only makes the screen bigger than the Amazfit GTR 47 mm, but also sharper than the company’s Cupertino watch. The display has a higher pixel density than the “Original”. Although the 341 ppi pixel density of the GTS is not much higher than the 326 ppi of the Apple Watch 4, it is enough to advertise with it. The panel even protects Huami with Corning’s Gorilla Glass 3, the 2.5D glass is slightly rounded on the sides.

The watch case is made of aluminium, the 20 mm bracelet of course made of silicone, which is especially advantageous for athletes. Without the strap you get a weight of 24.8 g, which makes the watch relatively light. With dimensions of 43.25 x 36.25 x 9.4 mm, it is comparable in size to the Apple Watch 4 44 mm, even though the Watch 4 has a slightly larger display. It is pleasing that the Xiaomi Amazfit GTS is protected against water according to the ATM 5 standard. So showering and swimming is no problem.

The Amazift GTS also looks good optically. The watch is available in six different colours, but the colours refer almost exclusively to the straps. The silicone bracelets are available in black, grey, blue, red, rosé and beige/gold. The aluminium case of the latter two is also coloured accordingly, while the other Colorways appear to be coming onto the market with a black or grey body.

It doesn’t seem to be a “real” Smartwatch, but rather a sports smartwatch like the Amazfit Stratos or the Amazfit GTR. After all, the manufacturer doesn’t use any internal memory, so there’s no App Store like on a Ticwatch C2 with WearOS. However, this has a positive effect on battery life. Inside is a 220 mAh battery, which is probably charged via a magnetic cable. Amazfit promises a battery life of 14 days with “normal” use, without Bluetooth, heart rate monitor and GPS are probably up to one and a half months. With permanently activated GPS you can only do about 24 hours.

Bluetooth 5 is available for the connection with the smartphone, but there is no WiFi chip. GPS and GLONASS are used to determine the position, and NFC is even integrated for Chinese users. This can be used there for public transport tickets, unfortunately Europeans cannot use this function.

For the different sports modes, the GTS offers almost the same sensory equipment as the GTR. These include an optical BioTracker heart rate monitor, a 6-axis acceleration sensor, an air sensor and a geomagnetic sensor.

The watch is especially interesting for athletes. You get a total of 12 sports modes, but some of them differ only slightly. These include of course a jogging mode (indoor, outdoor), a walking mode, cycling (indoor, outdoor), swimming, stepping, skiing or free training. In the respective modes, corresponding data are analyzed, such as distance, speed or calorie consumption. There is also sleep tracking or motion memory.

Like the other Amazfit Smartwatches, the GTS will probably also offer typical clock functions such as the weather display, music control, alarm and notifications.

What is really new is the operating system or the interface. There are probably more than 100 different watchfaces, but the view can partly be customized. So there are probably five modules on the watchface, which you can display and determine yourself, where they are located and what they should display. Especially the possibility to control your Watch face yourself should be a big advantage compared to other Amazfit watches. But how exactly this will look in practice, we will have to wait and see.

The aggressive marketing of Huami and Xiaomi and the bashing against Apple is nothing new for the Chinese, but you have to follow his words with deeds. The new Huami Amazfit Smartwatch seems to live up to this claim. We like the design very much and it almost looks like a pro version of the popular Huami Amazfit Bip 2. A sharp display with customizable watchfaces is a unique selling point. The Amazfit GTR almost has all the other features, hence the similar name.

If and when the Huami Amazfit GTS is officially available in Worldiwde is still unknown. In China the clock costs 899 Yuan, which corresponds to $135.99. With an import you have to expect a price of $149.99. But first we should wait for a global version. What do you think of the new Smartwatch? Do you like the design or are you a fan of the classic watch design?

Walking around the house? You can get the WalkingPad C1 from...

If you are looking for an accessory that allows you to keep active and be able to "walk" quietly at home, here is WalkingPad...

Happy Grandparents Day In TikTech With Great offers for you

Buy HIMO Z20 Electric Bike on Tomtop with Coupon for only...

This is what Laptop you need for distance learning/working @XIDU