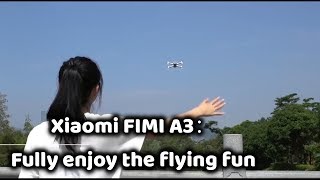 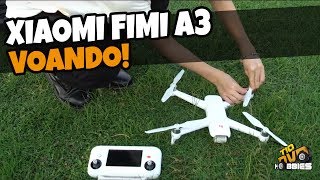 The FIMI A3 offers similar features on paper as the DJI Spark, but at a price of less than € 300. Reason enough to have a look at the drone.

In addition to cameras and gimbals, the company FIMI mainly sells drones. On its own homepage presents itself as a subsidiary Xiaomis and lists as milestones of the company, among other things, the development of Mi Drone and the Mijia Actioncam on. It is understood as an absolute part of the Xiaomi ecosystem, which is why we speak here exceptionally, despite a different name from a Xiaomi product.

At first glance, the drone makes the price especially interesting. A camera with Full HD @ 30 fps is spark level, as is the 2-axis gimbal. FIMI speaks of a “mixed 3-axis gimbal“; a combination of the mechanical 2-axis gimbal and a 3-axis electronic gimbal. In addition, a strong battery that will bring the drone despite the higher weight of over 500 g on a flight time of up to 25 minutes. The drone uses GPS and the Russian counterpart GLONASS to determine its position.

Outwardly, the drone reminds only minimally of the unofficial predecessor, the Xiaomi Mi Drone . Unlike Spark and Mavic Pro , however, the arms can not be folded in here, which makes the drone a little less suitable for transport in a bag or backpack.

Another difference to the DJI models (and also the Mi Drone) is the remote control, which has a built-in display. Unlike DJI so it does not need a smartphone with installed app. The range should be 1000 m; Since you can no longer recognize the drone from a distance of 300-500 meters, this is more than sufficient.

The Xiaomi FIMI A3 is best seen as an alternative to the Spark. Opposite it offers the better price and above all a much higher flight time. However, initial experience reports must first show how well the FIMI is doing in practice; After all, DJI has a head start of over a year here.

A drone, often mentioned together with the FIMI A3, is the Hubsan H117S Zino, whose price goes in the direction of $400, but has a 4K camera and advanced features. This is more like the Mavic Air. With both drones, two promising alternatives will be released by the end of the year.