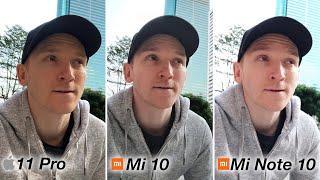 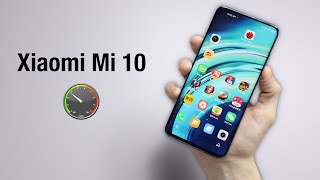 Xiaomi 10, which took the lead in carrying Snapdragon 865, is ahead of the generation in all aspects of CPU and GPU: Kryo 585 ‘s new A77 architecture brings 25% performance improvement. Adreno 650 on the image has also increased by 25%. Both high frame rate and ultra-high picture quality games have super flagship experience.

LPDDR5, the fastest memory in the industry

LPDDR5, a leapfrog upgrade! It has a huge impact on the improvement of smartphone performance. It can transfer 44GB of data per second. Compared with LPDDR4x, it is 50% faster and 20% lower in power consumption.

UFS 3.0, the fastest flash memory in the industry

Xiaomi Mi 10 not only comes with UFS 3.0 as standard, but also supports the new Write Turbo write enhancement technology. It is like adding a turbo engine to the write, which gives Xiaomi 10 a sequential write capability of up to 730MB per second. This may be the current The fastest writing flagship phone.

WiFi 6, the fastest WiFi in the industry

WiFi 6 is the latest WiFi standard in the 5G era. Compared to its predecessor, the speed is doubled! Not only is the network speed faster, it also optimizes the performance experience of a large number of devices surfing the Internet at the same time. Use 5G when going out, switch WiFi 6 at home and office, and have a fast network at any time …

Xiaomi is unusually productive in 2019. Several smartphones have already been released, as well as the first three models of the Redmi brand. The flagship of Xiaomi Mi 9 is relatively new to the market, but the rumors that the Chinese manufacturer is actively working on the creation of a new smartphone are becoming more and more frequent in foreign media. Today, the authoritative portal has published the design concept and proposed specifications of Xiaomi Mi 10.

According to rumors, the designers plan to make major changes to the concept of the new smartphone. On the front side will be a dual front camera. The holes in which the lenses are located are minimal in size, which allows you to noticeably expand the screen space. The sensors are centrally located. This is a major difference from the Samsung S10. Just above the cameras there is a horizontal hole in which the speaker is located. Side, top, and bottom frames are virtually absent. Looks incredibly spectacular smartphone, which is an extremely important aspect for the model flagship line.

The back panel traditionally houses the main camera. For the first time, Xiaomi relies on a four-lens module. The module is divided into 2 parts, one in the upper left corner and the other in the right. Mi 10 differs radically from its predecessor. The Chinese manufacturer has really improved the design.

Xiaomi Mi 10 will be equipped with the flagship Qualcomm Snapdragon 865 platform. The presentation of this CPU is scheduled for December 2019. Therefore, the new smartphone is expected to be released in January-February next year. The device will be available in several memory configurations. The most budget version is 8 GB + 128 GB. It is noteworthy that Xiaomi plans to release a version with 10 GB of RAM and 512 GB of flash memory.

The updated camera module will be able to provide photography with a resolution of 100 MP. On the front side there is a 12 MP + 12 MP front camera. The approximate cost of the new flagship is $450. Among the flagships of all manufacturers it will be the most affordable smartphone. In our online store you can buy Xiaomi Mi 10.

Xiaomi launched 70mai A1 and A1 Pro low-cost electric scooter

Today, crowdfunding announced a two-wheeled vehicle manufactured by Xiaomi and 70Mai. For several hours the necessary amount of money was collected. Deliveries in China...

You Can Get 20PCS KF94 Triple Filter Face Mask For Just...